Skip to main content
A woman receives a dose of the Pfizer/BioNTech Covid-19 vaccine in Sydney on February 21, 2021. ( AFP / STEVEN SAPHORE)

Social media posts have shared a claim that four miscarriages in women who received the Pfizer-BioNTech Covid jab were reported by Australia’s Therapeutic Goods Administration (TGA) from August 28 to 30. Comments to the posts indicate people thought the vaccine caused the miscarriages. But the posts are false. Figures from the TGA -- Australia's drug regulator -- show no reports of miscarriages for the said period. Experts say "no link" has been found between Covid-19 vaccines and miscarriages.

"This is happening in Australia alongside the under reporting of deaths and adverse events. Is that okay with you??" reads an Instagram post from September 13.

The post shares a graphic that claims there were four reports of "spontaneous abortions" -- more commonly known as miscarriages -- after the Pfizer-BioNTech Covid-19 vaccine between August 28 and 30.

It attributes the figures to "TGA DAEN" -- the Database of Adverse Event Notifications managed by Australia's drug regulator, the Therapeutic Goods Administration (TGA). 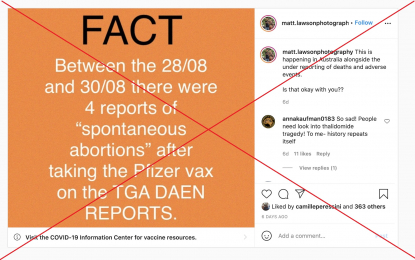 A screenshot of the misleading post as of September 20, 2021

After pursuing a "zero Covid" strategy for much of the pandemic, Australia has struggled to contain the more infectious Delta variant. State leaders are pushing to step up vaccination rates, promising to ease restrictions once higher vaccine coverage is reached.

"Very sad considering some women have a hard time conceiving as it is & to think maybe the one thing that was meant to help your health actually causes this," one wrote.

A search of the TGA's database here found no reports of "spontaneous abortion" in people who recently received the Pfizer-BioNTech Covid-19 vaccine between August 28 and 30, contrary to the claim in the posts.

Further searches found there were 32 such reports between January 1 and September 10.

However, a TGA spokesperson told AFP that "no link has been found between COVID-19 vaccines and spontaneous abortions."

An adverse event report in the TGA's database -- which can be submitted by members of the public as well as health workers -- "does not mean that the medicine is the cause", its website says.

Miscarriage is relatively common, with up to one in five confirmed pregnancies ending naturally before 20 weeks, according to the Australian government's Pregnancy, Birth and Baby website.

"There is no association between vaccination and any aspect of reproduction", Dr Benjamin Neuman, an expert in coronaviruses who chairs the Biological Sciences department at Texas A&M University-Texarkana, told AFP in February.

Articles in the New England Journal of Medicine and in the Journal of the American Medical Association did not find an increase in spontaneous abortion or adverse pregnancy outcomes in women who had been vaccinated with mRNA vaccines.

Medical experts recommend pregnant women receive an mRNA Covid-19 vaccine -- such as the Pfizer-BioNTech jab -- to reduce their risk of getting sick with the disease.

"COVID-19 vaccination with an mRNA vaccine is recommended for pregnant women because of the higher risks from COVID-19 infection for pregnant women and their unborn baby, and extensive global surveillance data for the safety of these vaccines in pregnancy," the TGA spokesperson told AFP.

The Royal Australian and New Zealand College of Obstetricians and Gynaecologists and the Australian Technical Advisory Group on Immunisation recommend that pregnant women are offered Pfizer mRNA vaccine (Comirnaty) at any stage of pregnancy.