Skip to main content
Sun shines through stained glass windows at the Cathedral of St. John the Divine in New York on May 6, 2021 ( AFP / Timothy A. Clary)

Facebook posts from the United States claim that religious tax exemptions cost $71 billion, and that removing them would allow taxes to be lowered to three percent. But experts say the calculation contains several errors, and that taxing churches would not generate enough revenue to pay for such a reduction. 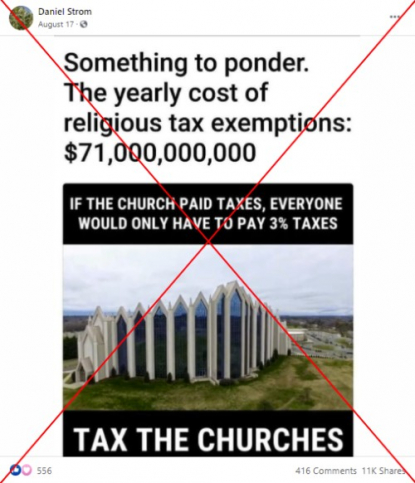 The posts feature an image of a large church with mirrored panels. A reverse image search determined that the picture shows Calvary Church, a non-denominational evangelical church in Charlotte, North Carolina.

The US Internal Revenue Service (IRS) website explains that places of worship, like other nonprofits, "are generally exempt from income tax and receive other favorable treatment under the tax law."

The Freedom Forum Institute, a nonprofit dedicated to ensuring First Amendment freedoms, says on its website that "the reasoning behind making churches tax-exempt and unburdened by IRS procedures stems from a First Amendment-based concern to prevent government involvement with religion."

The claims put the potential tax revenue from religious institutions at $71 billion. A 2012 article in Free Inquiry that tallied the cost of religious tax exemptions cites the same figure. The magazine is put out by the Council for Secular Humanism, which describes itself as "North America's leading organization for non-religious people."

The $71 billion figure represents "an effort to calculate these costs, but it gets a number of important things wrong," he said.

First, revenue for houses of worship -- donations, for example -- is counted as net income subject to corporate income tax. But income tax is imposed on profits, not gross revenue, Walczak explained.

"The fundamental problem here is that churches are nonprofit organizations, they literally do not have profits. They can make a significant amount... but they don't have profits that can be distributed to shareholders."

Even if houses of worship were taxed at the rate of corporations -- about 7.7 percent average per year -- doing this would yield only about $2.4 billion, Walczak wrote in a Tax Foundation blog post addressing the claim. For context, in 2020 the federal government took in more than one thousand times more -- $3.4 trillion -- in revenue.

He added that it assumes religious organizations have no expenses, which is incorrect.

In his blog post, Walczak also addressed the potential effect of making houses of worship subject to property taxes. "Nothing theoretically prevents states from authorizing local taxation of nonprofits' land and buildings, and the nature of property taxes may even argue in favor," he wrote.

The amount of revenue this could contribute to local governments would vary widely by location, as real estate in areas such as New York City or Boston is far pricier than other places.

"If governments ever decided to tax nonprofits' lands, houses of worship would contribute billions to local governments across the country, but given that local governments currently raise about $560 billion through property taxes, this would likely represent an increase in collections of less than two percent," Walczak wrote.

The social media posts claim that "if the church paid taxes, everyone would only have to pay 3% taxes." Both Walczak and McClelland deemed the statement false.

McClelland rejected the claim, saying: "I cannot possibly see how that is true."

Even if the $71 billion figure was correct, it would do little to lower taxes, he said, since that is a small fraction of the US federal budget.

Walczak called it "a wild unsubstantiated claim that's completely at odds with reality."

The potential revenue from taxing churches would be "negligible," he said. "You're not lowering anyone's taxes with that."

He concluded in his blog post that the idea that "taxing churches would raise substantial federal revenue is wildly inaccurate."

"On the whole, the notion that houses of worship are somehow depleting the treasury is what the Ten Commandments would call 'false witness.'"