These photos show schools hit by tornadoes in the US, not destroyed by rebels in Ethiopia

Images of buildings in ruin have been shared on Facebook in Ethiopia purporting to show schools in the country’s Amhara region destroyed by rebels backing the Tigray People’s Liberation Front (TPLF). Large parts of Amhara, which shares a border with Tigray, have been infiltrated by rebels and several schools were destroyed in the ongoing conflict. However, the images shared on Facebook show American high schools destroyed by tornadoes in Missouri and Texas, in 2011 and 2019 respectively.

The images were published on Facebook on September 1, 2021 and have since been shared more than 50 times. 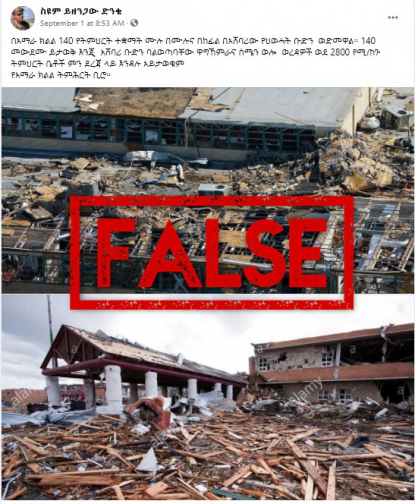 “In the Amhara region, 140 educational institutions were partially and completely destroyed by the terrorist group TPLF,” the caption of the post reads.

The Amhara region, located north of the Ethiopian capital, Addis Ababa, has been scarred by fighting between government troops and the TPLF rebels.

The conflict erupted when Ethiopian Prime Minister Abiy Ahmed sent troops to topple the TPLF leadership in the region, following an attack on a federal military base in November 2020. Since then, the conflict has claimed thousands of lives and triggered a major humanitarian crisis.

According to Ethiopia’s education minister, more than 7,000 schools have been damaged and 1.42 million students were unable to attend classes as of the end of August, as AFP reported. Kindu Fenta, 17, reads inside a classroom that was allegedly looted by pro-TPLF rebels in Zarima, 140 kilometres from Gondar in Ethiopia ( AFP / Amanuel Sileshi)

However, the images of the damaged schools published in the Facebook post were taken in Joplin, Missouri, and Dallas, Texas following tornadoes.

By running a reverse image search, AFP Fact Check found that the first image shared in the Facebook post was published by The Dallas Morning News in an article called “Dallas tries to do the impossible after tornado: move 3,000 students to different schools in 36 hours”.

In October 2019, the states of Texas, Louisiana, Arkansas and Oklahoma were hit by powerful tornadoes, knocking out the power in the city of Dallas. 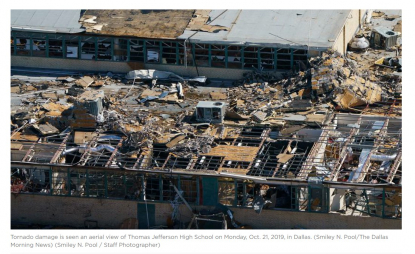 Screenshot of the original image on the website of The Dallas Morning News, taken on September 22, 2021

According to the school district’s official Twitter account, a total of five schools in Dallas, including the Thomas Jefferson High school, “sustained extensive damage”.

Check back for updates.

Also via a reverse image search, AFP Fact Check found that the second image shared in the Facebook post showed up on Age Fotostock, an international stock photography agency based in Barcelona. 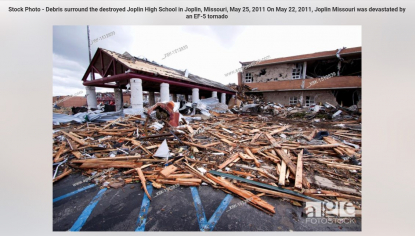 According to the caption, the photo shows debris around Joplin High School in Joplin, Missouri in the United States. The image was taken on May 22, 2011, also following a tornado. It was credited to photographer Ryan McGinness, who covered the tornado’s aftermath.

The tornado packed winds of more than 320 kilometres (200 miles) per hour and caused damage costing billions of dollars, as AFP reported.