A photo has been shared in multiple Facebook posts that claim it shows a military convoy ambushed by an anti-junta armed group in Myanmar's Magway region in 2021. But the claim is false. The photo in fact shows a still from an American movie called "Jarhead: Law of Return" that was released in 2019.

The photo was published on Facebook here on September 20, 2021. 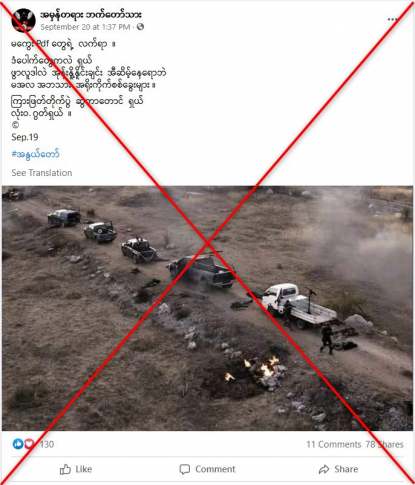 A screenshot of the misleading post, taken on September 22, 2021.

The photo's Burmese-language caption translates in part as: "A work of Magway PDF... Sons of MAL, military dogs which bite bones. Even an sudden ambush went so special. Absolutely special. Sep.19".

Magway is a region located in central Myanmar.

"PDF" is an acronym for "people's defence force" -- armed groups set up by a shadow government in Myanmar in response to deadly crackdowns against anti-coup protesters.

The country has been in turmoil since February when the military deposed civilian leader Aung San Suu Kyi, triggering a mass uprising of daily protests.

"May PDFs be safe," said another.

The same photo was also shared alongside a similar claim on Facebook here, here, here, and here.

Online searches on Google found the photo in fact shows a still from an American movie released in 2019 titled "Jarhead: Law of Return".

An AFP journalist watched the movie and found the photo in the false posts corresponds to a scene around the one-hour and 28-minute mark.

An identical photo was also published in this 2019 Spanish-language review of Jarhead: Law of Return.

And a still showing the same scene from a different angle was uploaded on the IMDB page of the movie here.

Multiple keyword searches found no credible reports about an ambush in Myanmar's Magway region on September 19, 2021 as the misleading posts allege.