An image of a black and white object has been shared hundreds of times on Facebook alongside a claim that it shows a new coral species found near the Galapagos Islands. But the claim is false; the image has been digitally created using computer software and does not show coral.

The image was shared by an Australian-based Facebook user here on September 12, 2021.

The post's caption reads: “New species of Coral that has been found near the Galapagos Island (sic)”. 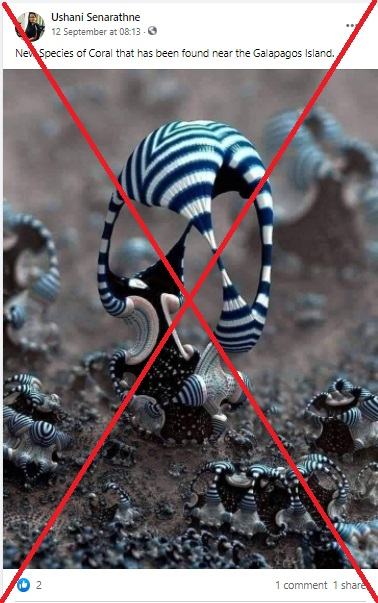 The image has been shared by Facebook users from around the world hundreds of times here, here, and here alongside a similar claim.

The image, however, is a digitally created 3D artwork.

A reverse image search on Google found the image was originally posted here by a user named Batjorge on the art sharing website, DeviantArt, on August 26, 2017.

Below is a screenshot comparison of the image in the misleading post (L) and the image posted on DeviantArt (R): 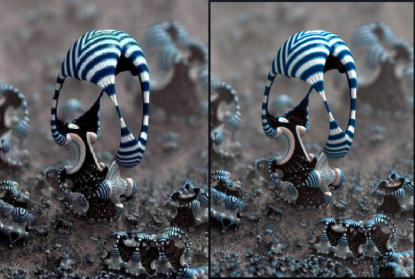 According to the description uploaded alongside the artwork it was created using 3D fractal creation software called Mandelbulb 3D (MDB3).

Mandelbulb 3D turns linear equations into a range of fractal objects, according to the program’s website. It then renders the objects in three dimensions, allowing “the user fine control over the imaging effects”.

On his website, Batjorge, whose real name is Jorge Abalo, describes himself as a “self taught artist who has been making art for as long as he can remember''.

“He began working in digital art in the 1990s, and did comic illustration, design (Adobe CS), 3D modeling (3ds max, Terragen, Bryce, Poser), and flame fractals (Apophysis) before being introduced to Mandelbulb 3D in 2011,” the website's About page reads.

In a June 2020 comment on the original upload of the artwork to DeviantArt, another user explains the image is being shared alongside a claim that it shows a “new coral species found near the Galapagos Islands”.

Responding to the comment, Abalo explained he was aware of the virality of the image, but there was nothing he could do to correct the posts as they’ve been shared “hundreds of thousands of times”.

“But it amuses me to see people's reaction. I never claimed it as [anything] other than a 3d fractal digital work, done with Mandelbulb 3D software,” Abalo said in his comment.

Abalo also refuted the misleading claim in another post uploaded to DeviantArt here on April 8, 2021, titled "Not a coral".