A video of a massive fire has been viewed hundreds of thousands of times in multiple posts on Facebook alongside a claim it shows a Chinese shop on fire in Malaysia. The claim is false: the video shows a fire at a gas canister store in Vietnam.

The post's caption states: “Today a fire broke out in a Chinese shop in Malaysia and then slowly the gas cylinders started exploding one by one and at one stage became huge”. 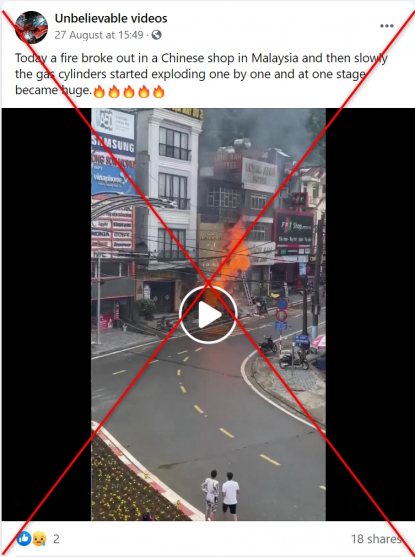 A reverse image search on Google found the video appeared in this report on August 11, 2021 by Vietnam Net, a Vietnamese news outlet.

According to the report, a gas canister store at Sa Pa, a town in Lao Cai province, in northwestern Vietnam, caught fire on the morning of August 11, 2021.

Below is a screenshot comparison of the video in the misleading post (L) and the video in Vietnam Net's report (R):

The fire was also reported on August 12, 2021, by Tuoi Tre News, an English-language Vietnamese news site.