The photo was posted on September 17, 2021, here on Twitter, where it has been retweeted more than 800 times.

It was shared by Umar Saif, the chief digital officer for Pakistan's Jang Media Group, who has more than 158,000 Twitter followers.

The image shows a convoy of security vehicles and personnel on a road. 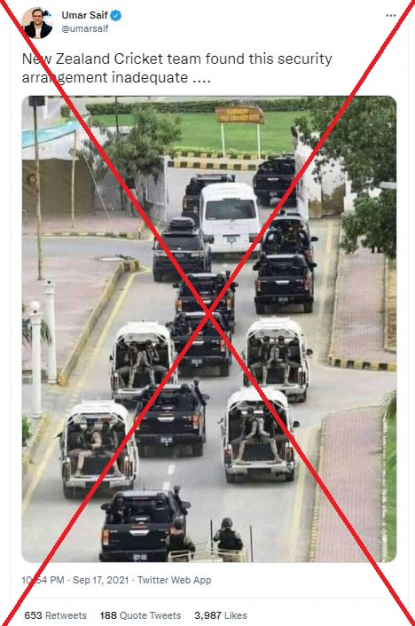 The New Zealand cricket team cancelled its tour of Pakistan on September 17, 2021, citing a security threat.

The move was a massive setback to Pakistan, which has been trying to revive tours by foreign sides after home internationals were suspended in the aftermath of a 2009 terror attack on the Sri Lankan team, AFP reported here.

Pakistan, deeply frustrated by the last-minute withdrawal, has denied any security threats.

The image shows a security escort for the Sri Lanka cricket team during their tour of Pakistan in 2019.

The photo was published in this September 30, 2019, news report by Sri Lankan media outlet The Morning.

The first paragraph of the report reads: "An unprecedented level of security is being given to the Sri Lanka team, now playing their first match, an ODI [One Day International], on their ongoing Pakistan series, at the Karachi International Stadium."

Below is a screenshot comparison of the photo in the misleading post (L) and The Morning 's photo (R):

The image was also published in this report about the Sri Lankan team's tour of Pakistan on October 2, 2019, by The Indian Express, an Indian media outlet.