Covid-19 case numbers do not show that vaccines are ineffective

Social media posts claim peak active cases of Covid-19 were lower in 2020 than after the rollout of vaccines in 2021, suggesting this means the shots are ineffective. But experts say hospitalizations and deaths -- which are much likelier to occur among the unvaccinated -- are the key metrics of how well the shots work.

"I hate to break this to you, but this not a 'pandemic of the unvaccinated,'" it adds, seemingly criticizing the language US President Joe Biden has repeatedly used to describe the situation in the country, when urging people to get vaccinated. 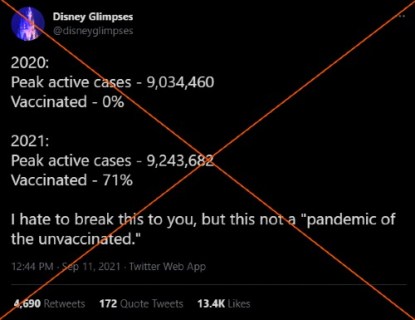 A subsequent tweet in the thread added a disclaimer to the original, saying: "I'm not suggesting the vaccine doesn't do what it is designed to do (which is keep people out of the hospital). What I am suggesting is that forcing vaccination on people is not going to stop cases from spreading."

"Cases alone tell increasingly less of the public health story that we want to know about... We want to know about severe disease, hospitalizations and deaths caused by the virus," said Josh Michaud, associate director for global health policy at the non-profit Kaiser Family Foundation (KFF).

The peak active case numbers mentioned in the posts "do not lend themselves to comparisons across different time periods or different locations because so many unknown and unknowable factors are involved that potentially bias the estimates," he said.

The posts do not specify how many infected people were vaccinated, or that the now-dominant Delta variant is much more contagious than the original strain of the virus, Michaud said, also noting that measures aimed at curbing the spread of the virus were stricter in 2020, possible contributing to greater spread in in 2021.

Stefano Bertozzi, health policy professor at the University of California, Berkeley, likewise said the key metric is the impact of vaccination on mortality.

'Pandemic of the unvaccinated'

The assertion in the social media posts that "this is not a 'pandemic of the unvaccinated'" is also inaccurate.

"It is absolutely an epidemic among the unvaccinated. The unvaccinated are also responsible for the great majority of the cases among the vaccinated -- because they cause them to be exposed," Bertozzi said.

Researchers have determined that unvaccinated people are at much greater risk from Covid-19.

Michaud pointed to a report by KFF researchers who found that nine in 10 "Covid-19 cases, hospitalizations, and deaths have occurred among people who are unvaccinated or not yet fully vaccinated, in those states reporting breakthrough data."

And a US Centers for Disease Control and Prevention (CDC) report released in September said that after Delta became the dominant variant, the risk of infection for fully vaccinated people was reduced by five times and the risk of hospitalization or death by more than 10 times compared to those who were not fully vaccinated.

The social media posts do not provide a source for the figures they cite, and Michaud said there is no standard definition for "peak active cases," so the numbers are not verifiable.

"The bottom line is that any estimates of peak active cases are built on lots of assumptions and educated guesses, and it is almost impossible to know what the 'true' value is at any given point in time," he said, calling the figures in the posts "highly questionable."

The CDC tracks total reported Covid-19 cases as well as daily new cases, but does not list the overall number of cases active at a given time. Daily cases peaked in January 2021 -- before the widespread rollout of the vaccines.

The figure of 71 percent of people vaccinated in the United States is also inaccurate. The actual number for fully vaccinated people is 54.2 percent, while 63.5 percent of the population has received at least one shot, according to the CDC.

AFP has fact-checked more than 1,000 claims related to the coronavirus pandemic, available here.