CDC has not warned of polio-like illness outbreak in 2021

An article shared hundreds of times on social media claims that the US Centers for Disease Control and Prevention (CDC) has warned of an expected outbreak of a polio-like illness in 2021, with some social media users suggesting this is an attempt to cover up adverse reactions to vaccines. This is false: the CDC's alert was from 2020 and it has issued no such warning in 2021. Furthermore, there is no link between that illness and Covid-19 vaccination, the public health agency told AFP, while data shows that Covid-19 vaccines are overwhelmingly safe.

“US Warns Of Polio-Like Illness Outbreak In Four Months”, reads the headline of an image posted on Facebook on 29 August 2021. The picture is a screenshot of an article published by the Florida Star on 20 August 2021 that has been shared over 800 times on Facebook.

The article claims that the CDC alerted of an expected outbreak in the next four months of Acute Flaccid Myelitis (AFM), a rare but serious neurologic condition, on 17 August 2021. According to the article, the warning can be found in CDC’s latest Vital Signs report, a monthly publication covering important health threats.

Some users on social media have interpreted this warning as an attempt to cover up adverse reactions to vaccines:

“See how they cover up the massive wave of adverse reactions soon to come up from their voodoo needle?” says this post , which has been shared over 600 times on Facebook. Similar claims have also been shared here , as well as on Twitter. 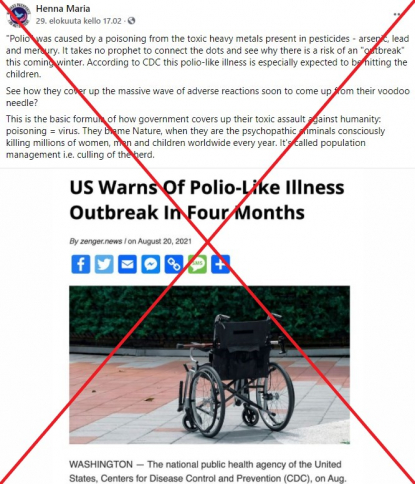 The claim is false on multiple levels. First of all, the timeline in the article is wrong -- the CDC confirmed to AFP that the agency had not issued any official warnings about AFM in 2021:

“CDC has not issued an official warning such as a HAN or an Epi-X alert to clinicians on Acute flaccid myelitis (AFM) in 2021. However, CDC’s AFM Team continues to work with state health departments and professional medical organizations to educate clinicians about AFM in case we do see an increase in cases this year”, Scott Pauley, Press Officer at CDC told AFP on 8 September 2021.

Contrary to the claims made in the article, the CDC has not issued any press releases or Vital Signs reports relating to AFM in 2021 either.

The claim appears to be based on a warning the CDC issued on AFM over a year ago on 4 August 2020. While otherwise identical to the false reports circulating in 2021, this real warning came over four months before the vaccination rollout took place in the US in mid-December 2020.

"There is no connection between AFM and COVID-19 vaccines," Pauley from the CDC told AFP.

According to a review published in the medical journal Lancet in January 2021, AFM is thought to be caused by non-polio enterovirus infection:

“To date, the virus suspected to be the predominant driver of the seasonal, biennial outbreaks of AFM observed in many global regions is enterovirus D68.” However, "the specific mechanism by which infection with enterovirus D68 leads to AFM is not fully understood."

The CDC began tracking AFM in August of 2014 -- long before the Covid-19 pandemic. 665 confirmed cases reported since then. According to CDC, most patients “developed AFM between August and November, with increases in AFM cases in 2014, 2016, and 2018.”

In addition, while the social media posts suggest the Covid-19 vaccines cause widespread adverse reactions, after millions of injections and "the most intense safety monitoring in U.S. history," the CDC has found the jabs to be overwhelmingly safe, causing only mild side effects in the vast majority of cases.

The rare serious side effects listed here , some of which are still under investigation by the CDC, do not include AFM. 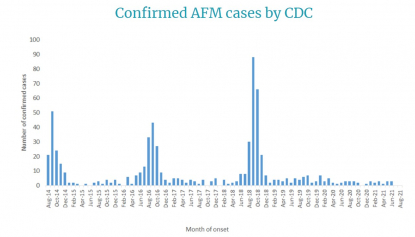 To verify the claim, AFP traced the origins of the article.

AFP contacted Zenger News to ask why the article is no longer online. Zenger news told AFP that the story in question was published by Asian News International (ANI), a wire service in India. Zenger carried the article in syndication but took it down after the story turned out to be false:

“A reader asked us to investigate the story’s claims, and we determined that the CDC hadn’t made a statement that was the basis of ANI’s reporting”, Nate Miller, spokesman for Zenger, told AFP on 10 September 2021.

Zenger terminated its relationship with ANI in late August 2021, Miller said. At the time of writing this article, ANI still has the story online on their website. ANI attributes the article to Sputnik News, a Russian state-owned news agency.

Based on a keyword search, however, Sputnik has not reported on the CDC’s warning for AFM in August 2021. They do have an article that came out in August 2020, correctly reporting on the original CDC warning. 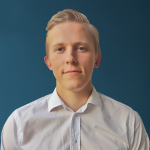