An image purporting to show Taliban fighters riding a vehicle that resembles Tesla's futuristic Cybertruck has been shared in multiple social media posts after the group's takeover of Afghanistan. However, the image has been doctored; the original photo by Associated Press (AP) news agency shows the men in a different type of truck.

The image shows three armed people riding in a truck. The vehicle's distinctive shape resembles Tesla's Cybertruck, an all-electric vehicle with a "nearly impenetrable exoskeleton" and "armor glass" that was unveiled by the innovative tech firm in 2019. 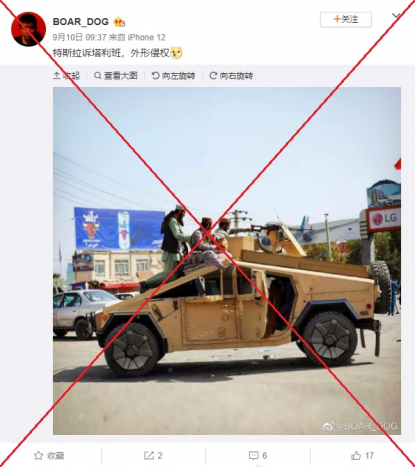 Screenshot taken on September 17, 2021, of the misleading Weibo post

The same image was also shared alongside similar claims about Tesla's Cybertruck here on Weibo; here and here on Twitter; and here on Facebook.

However, the image has been doctored from a photo that shows the fighters riding in a different vehicle.

Reverse image and keyword searches found this photo published by AP on August 16.

Below is a screenshot comparison of the image shared in the misleading posts (L) and the photo published by AP (R):

"Thousands of people packed into the Afghan capital's airport on Monday, rushing the tarmac and pushing onto planes in desperate attempts to flee the country after the Taliban overthrew the Western-backed government."