Facebook posts shared hundreds of times purport to show a photo of crowds packed onto Sydney's Bondi Beach in September 2021 as the city imposed strict lockdown measures to curb a spike in Covid-19 cases. However, the claim is false. The photo has circulated online since at least 2012.

The post, which has been shared more than 400 times, show a photo of a crowded Bondi Beach.

Text superimposed on the photo reads: "Only spreads at protests? Not the beaches ???" 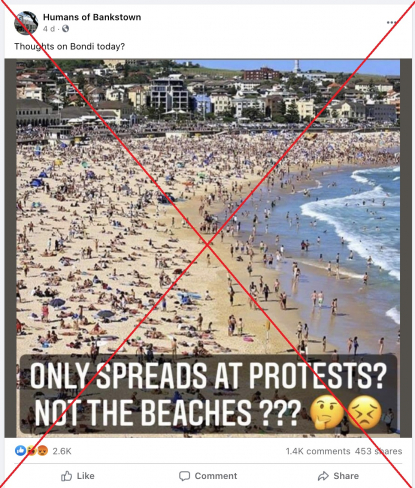 A screenshot of the misleading post as of September 16, 2021.

Local media reported a high turnout of beachgoers over the September 11, 2021, weekend as temperatures rose across the city.

Australia's largest city, Sydney, has imposed strict lockdown measures in a bid to contain a spike in cases fuelled by the fast-spreading Delta variant.

Lockdown rules were relaxed on September 13, 2021, but remained strict, with groups of up to five fully vaccinated people allowed to gather outdoors for up to an hour. A five-kilometre (three-mile) travel limit across Sydney remained in place.

The same photo was shared with a similar claim on Facebook here and here.

Below is a screenshot of the photo on Flickr:

The photo was uploaded by a user named Alex Proimos on January 5, 2012.

The post states that the photo is titled "The Famous Bondi Beach" and it was taken on January 2, 2012.

Below is a screenshot comparison between the photo in the misleading post (L) and the Flickr photo (R):

The image also appears in Wikimedia Commons here and in articles published by Australian Geographic in 2017 and Hong Kong Free Press in 2019.