This video shows a scene from a Chinese TV series

As armed groups reportedly sprung up in Myanmar in defiance of the military junta, a video has been viewed more than a hundred thousand times in social media posts that claim it shows military airstrikes on a village. However, the claim is false; the footage was taken from a Chinese TV series called "Glory of the Special Forces".

The video -- which shows a wave of explosions -- was shared on Facebook on September 10.

Its caption reads: "10/9/2021- This is the record video that Lungler village in ThanTlang township, Chin state was attacked by a Military fighter jet". 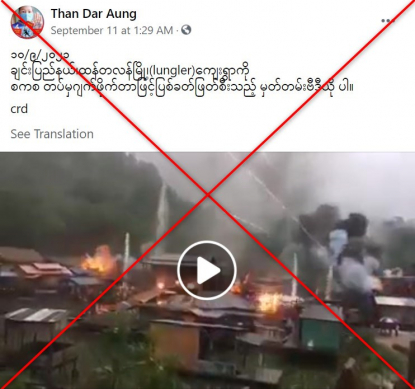 A screenshot of the misleading post, taken on September 15, 2021

Residents in several townships in Myanmar have reportedly formed armed groups to train to overthrow the military junta that seized power in February's coup.

The video circulated after CDF, a newly-founded armed group in Chin state, claimed it and another rebel group had seized a military stronghold close to Lungler village -- known in Burmese as Lon Le -- in ThanTlang township, after battling attacks from military fighter jets.

The Times of India reported that the military sent helicopters and fighter jets to counter the attack, but did not mention if a village was attacked.

However, the claim is false. The video does not show military airstrikes on a village in Myanmar.

Keywords searches found the video corresponds from the 45-second mark of this clip posted on September 6, 2019 on the official Weibo account of the Chinese TV series "Glory of the Special Forces".

The Chinese-language post reads, "Explosion on the cliff, rolling in the mud, persistence in the wind and rain".

Below is a screenshot comparison between the misleading Facebook video (left) and the Weibo video (right).

Rumor Buster, the fact-checking service of Shanghai Observer, a news app run by Chinese-state newspaper Jiefang Daily previously debunked the video in 2019 after it circulated in social media in China claiming it showed a scene in Myanmar.

"On July 5 this year (2019), director Xu Jizhou published a Weibo post saying, 'Done with another scene.' Along with the caption, he posted a video, the same one which circulated on the Internet a few days ago," Rumor Buster said.

"Based on Xu Jizhou's recent Weibo posts, this video shows a fragment of the TV series 'Glory of the Special Forces' which is currently being filmed."

Below is a screenshot of Chinese director Xu Jizhou's Weibo post in Rumor Buster's debunk. AFP contacted Xu Jizhou but has not received a response.