After the Taliban took control of Afghanistan in August 2021, a video appearing to show soldiers failing to jump through a flaming hoop was shared on Facebook and Twitter alongside a claim it shows "Indian commandos" preparing to fight the Taliban. The claim is false: the video has circulated online since at least March 2020 in posts about a graduation ceremony for Ethiopian armed forces.

The post's caption reads: "Indian SSG commandos are ready to fight with #Taliban".

The video shows soldiers wearing white vests and military fatigues. One soldier is set on fire after attempting to jump through a flaming hoop. His colleagues then gather around him to extinguish the flames. 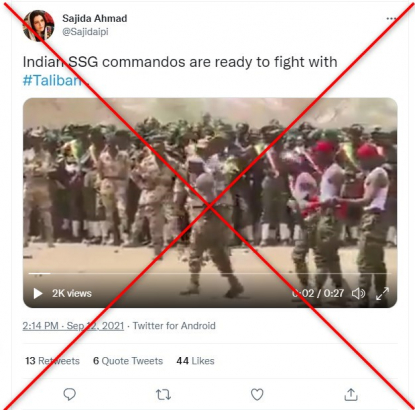 Screenshot of the post falsely claiming to show Indian troops training to fight the Taliban. Taken on September 14, 2021. ( AFP / )

The video circulated online after the Taliban seized power in Afghanistan. Historically, the Taliban has seen India as a proxy of its archrival Pakistan. Qatar-based news network Al Jazeera reported here.

The video has circulated online since March 2020 in posts about a graduation ceremony for soldiers in Ethiopia.

A reverse image search found the same footage was published on YouTube here on March 11, 2020.

The video's caption reads: "A special commando from the Oromia special force caught on fire while showing his skill on his graduation day in Ethiopia".

It shows soldiers wearing the same outfits. It also features the Ethiopian flag and a flag of Ethiopia's Oromia region.

Below are screenshot comparisons of scenes in the video in the misleading posts (L) and the OBN video (R) with similar features highlighted by AFP: 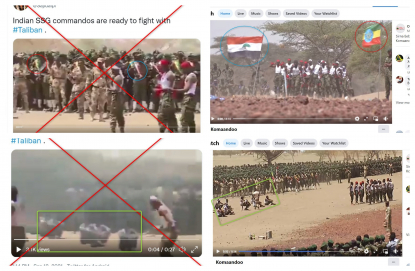 Screenshot comparing the video in the misleading posts (L) and the video from OBN (R), with the similar flags and people sitting on the ground highlighted by AFP. Taken on September 15, 2021. ( AFP / )