Facebook posts claiming that the prosecutor of the International Criminal Court (ICC) has “thrown out” a case against Kenya’s Deputy President William Ruto have been shared hundreds of times. But the claim is false: the case against Ruto in which he is accused of crimes against humanity collapsed in 2016 and there is no record of new proceedings against him at the Hague-based tribunal. The office of the prosecutor confirmed to AFP Fact Check that Karim Khan – who was Ruto’s lawyer during his trial – recused himself from all Kenya-linked ICC cases after he was elected the tribunal's chief prosecutor in 2021.

“Breaking News. Karim Khan the ICC prosecutor has thrown away the case that was filed against William Ruto saying that the case has no solid evidence… Karim Khan was once Ruto's lawyer during the first trial of the case when Fatou Bensuda was once the Prosecutor (sic),” reads a Facebook post published on August 13, 2021, and shared more than 200 times. 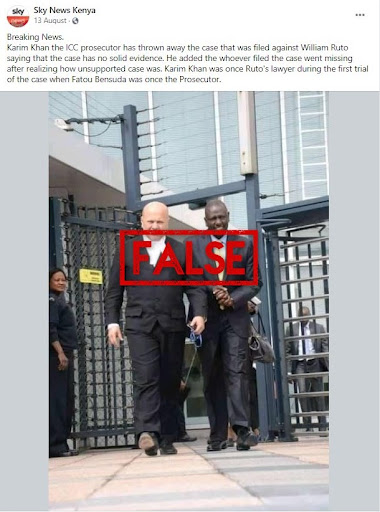 While the Facebook page is called "Sky News Kenya" and imitates the logo of the Sky News television station, it has no relation to the British broadcaster.

Ruto went on trial in 2013 over post-election violence in December 2007. But the case collapsed in 2016, with the ICC’s then-chief prosecutor Fatou Bensouda citing a “relentless” campaign of victim intimidation. Khan, who was Ruto’s lawyer during his trial, replaced Bensouda as chief prosecutor at the international tribunal on June 16, 2021.

Contrary to the false claim, Ruto’s case at the ICC fell apart on April 5, 2016, when the majority of judges decided that the prosecution did not have sufficient evidence for a conviction.

The judges nonetheless noted that “the decision does not preclude new prosecution in the future either at the ICC or in a national jurisdiction”.

The ICC confirmed that Khan was no longer Ruto’s lawyer.

“Note that pursuant to art. 42.7 of the Rome Statute, Mr Karim A.A. Khan QC in his capacity as the Prosecutor of the International Criminal Court (ICC) has recused himself from all Kenya cases before the ICC, and has instituted practical measures to protect against any conflict of interest that may be perceived to arise from his former representation of ICC suspects or accused persons”, the office of the prosecutor told AFP Fact Check in an email.

Khan’s recusal was widely covered by Kenyan media, including here.

There is no official record on the ICC’s website of a new case against Ruto.

The prosecutor’s office said that though the public was free to send any information on alleged crimes, such communications remain confidential and the public will only be informed "at the time of any significant developments".

The Facebook claim surfaced as Kenyan lawyer Paul Gicheru is facing trial at the ICC for bribing witnesses in the case against Ruto and radio presenter Joshua Sang with an aim of undermining the prosecution’s case against the two.

The ICC issued a warrant of arrest against Gicheru more than five years ago and the lawyer finally surrendered himself on November 2, 2020.