The special adviser to the Lagos state governor on drainage and water resources, Joe Igbokwe, claimed on Facebook that Nigeria’s agricultural sector grew by 23 percent between April and June 2021 despite the country’s security challenges. This is false: Igbokwe appears to have confused agriculture’s overall contribution to the economy, at roughly 23 percent, with the sector’s actual quarterly growth, which was far more modest.

Igbokwe is a staunch member of Nigeria’s ruling party, the All Progressives Congress (APC), and regularly uses social media to praise President Muhammadu Buhari and the work of his administration.

He published the claim on Facebook, alongside seven pictures of agricultural produce, barely a week after Nigeria’s National Bureau of Statistics (NBS) released the country’s GDP numbers for the second quarter of 2021.

GDP is short for gross domestic product: an economic indicator that measures the performance of a country over a certain period.

“Nigeria is a great country,” reads Igbokwe’s Facebook post from September 1, 2021. “Despite Insecurity Nigerian Agricultural sector recorded over 23% growth in the second Quarter of 2021 (sic).” 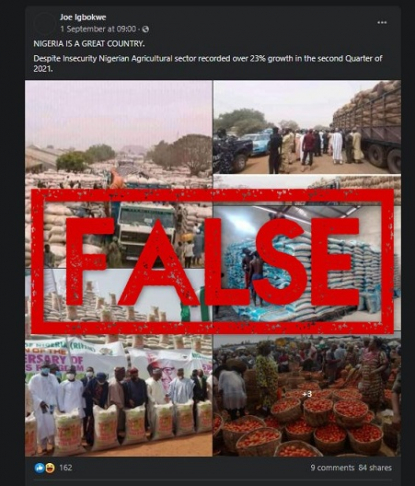 The NBS data, the latest for 2021, show the Nigerian economy grew by five percent between April and June compared to the same period last year. The increase also marked the third consecutive quarter of growth since the economy emerged from recession in 2020, according to the NBS.

However, AFP Fact Check reviewed the NBS data and found that Igbokwe misrepresented agriculture’s total contribution to the economy as quarterly growth for the sector.

The NBS measures the performance of Nigeria’s economic sectors in nominal and real terms, the latter adjusted for inflation.

For each, the statistics office compares a quarterly performance with the previous three months and with the same period from the year before.

According to the latest data, agriculture recorded real growth from April to June of 1.3 percent and nominal growth of 6.36 percent compared to 2020. And compared to the previous three months, the sector grew 5.55 percent in real terms and 1.03 percent in nominal terms. 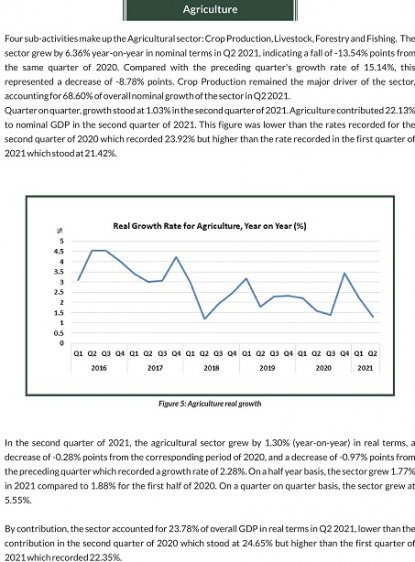 Screenshot of the NBS report

The figure Igbokwe cites in his Facebook post is actually the sector’s total contribution to the economy – 22.13 percent to nominal GDP and 23.78 percent to real GDP, according to a report that accompanied the data.

Since world crude prices crashed in 2014, oil-dependent Nigeria has been looking for ways to diversify the economy away from the commodity into other sectors, including agriculture.

While agriculture remains Nigeria’s single largest contributor to GDP, overall growth has been slow and food prices have escalated on the back of persistent security challenges.

AFP Fact Check has previously debunked claims by Igbokwe, including a set of old images of military aircraft he circulated as part of the recently acquired fleet of Tucano fighter jets firing at criminals in northern Nigeria.