A photo has been shared repeatedly in multiple Facebook and blog posts that claim it shows a military truck blown up by protesters in the Dagon township of Myanmar's largest city Yangon in September 2021. The claim is false: the image has circulated in reports about a military truck explosion in Yangon's Tamwe township in June 2021.

The photo of a truck engulfed in flames was published on September 9 in this blog post.

The headline reads: "The [fight] gets intense in Dagon". 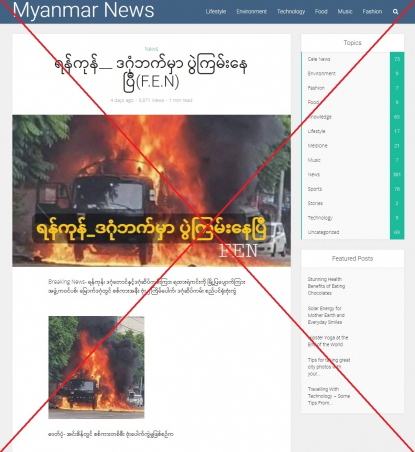 A screenshot of the misleading post, taken on September 13, 2021

The post emerged online after a call to arms from Myanmar's so-called National Unity Government (NUG) -- which claims to be the country's legitimate government and is made up of dissident lawmakers in hiding or exile -- against the military junta.

The country has been in chaos since the military seized power in February, sparking mass pro-democracy rallies followed by a deadly crackdown and renewed fighting with ethnic rebel militias in border areas.

A reverse image search on Google found the photo of the burning truck circulated in reports from June about a military truck that was blown up by anti-coup forces in Yangon's Tamwe township.

Myanmar Now reported on the blast in this report from June 18. It features the same photo circulating in misleading posts. The military truck had soldiers inside when it was "hit by a large explosion" in an attack against the junta regime in Tamwe township on June 18, Myanmar Now reported.

Below is a screenshot comparison of the photo in the misleading posts (L) and the photo in Myanmar Now's article (R):

A keyword search found local media reports on a bomb targeting military vehicles in Dagon township on September 9. AFP was unable to verify the reports.