A video of an attack on a military convoy has been viewed hundreds of thousands of times in multiple Facebook posts in August 2021 that claim it shows a recent ambush in Myanmar. The video circulated online after Myanmar's ousted lawmakers called for people to fight back against the junta. The video, however, has been shared in a misleading context: it predates the Myanmar military coup. It has circulated in reports since 2020 about the Arakan Army -- an ethnic armed organisation based in Myanmar's Rakhine state -- attacking a military convoy.

The video was shared in this Facebook post published on September 9, 2021. It has been viewed more than 350,000 times.

The post's Burmese-language caption translates to English as: "Guys who yelled, 'whoever wants to die, come out' on the streets in the cities, are now running like dogs. It is laughable how they are running like dogs now". 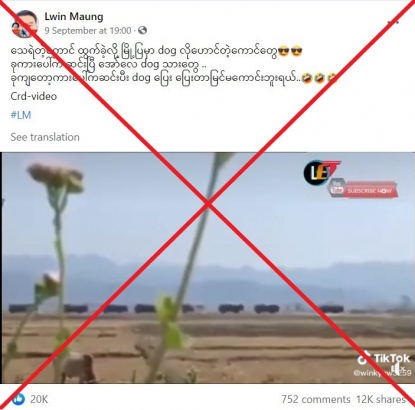 The video circulated online after the National Unity Government (NUG) -- a shadow government formed by ousted Myanmar lawmakers -- declared a "defensive war" against the junta on September 7, 2021.

The so-called "People's Defence Force" (PDF) is made up of civilians who fight back against security forces with homemade weapons, but they have yet to make a major impact.

Comments on the post suggested some people believed the video shows a recent attack on a military convoy in Myanmar.

"May PDF win all the fights and all PDF fighters be safe", one Facebook user commented.

Another user commented: "It is their turn now after all their abuse to the people".

The video has also been shared alongside a similar claim on Facebook here, here , here and here.

The clip has actually circulated in reports since 2020 about the conflict between the Myanmar military and the Arakan Army (AA) -- an ethnic armed organisation based in the country's Rakhine state.

Keyword searches on Google found the same video was shared on YouTube on July 10, 2020.

It was uploaded by Myanmar news outlet People Media. The title reads: "Video file of the AA's mine attack on the military convoy".

The video's Burmese-language description reads: "The military convoys that are engaged in the fighting in the conflict zones in Northern Rakhine State are often attacked and are facing casualties. The military needs different replacement equipment, said a retired military general".

Below is a screenshot comparison of the misleading post (L) and the video on People Media's YouTube channel (R):

The conflict between the Myanmar military and the Arakan Army in northern Rakhine State was also reported by Myanmar news website The Irrawaddy in June 2020.

The Arakan Army -- which claims to represent ethnic Rakhine Buddhists in western Myanmar -- has waged war against the junta since its formation in 2009.