A video of two men fighting has been viewed tens of thousands of times in Facebook, Twitter and YouTube posts claiming it shows a fight between a Chechen man and a Russian police officer who insulted Islam. The claim is false; the video circulated in news reports about a fight between a man and the security guard of a café in the Moscow region. Russian police officers heard in the video do not mention Islam.

The video was posted here on Facebook on September 4 and has since been viewed more than 47,000 times.

The one-minute clip shows a man talking with police officers while two men engage in a punch-up in the street.

Background music in the video means it is not possible to hear the conversation between the man and police officer. 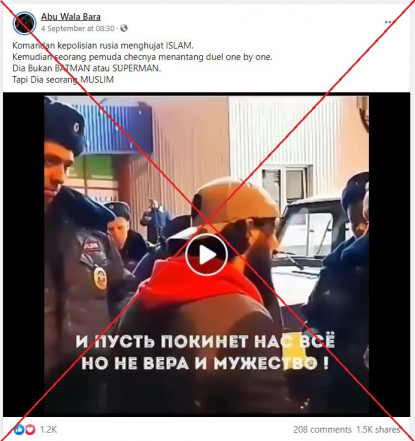 "Then a young Chechen challenged a one-by-one duel. He is not BATMAN or SUPERMAN. But he is a MUSLIM."

Russian text superimposed on the video reads: "And let everything leave us but no faith and bravery!"

The same video has circulated online since at least 2020, and has garnered more than 262,000 views. AFP has archived some of the posts on Facebook here, here, here and here; on Twitter here and here; and on YouTube here.

A reverse image on Yandex followed by keyword searches found this longer video without the song added in the background.

The video, which goes on for almost two minutes, was posted on YouTube on February 26, 2020, with the title and caption, "Interesting set-up with cops. ONE-ON-ONE FOR DISASSEMBLY WITH GUARD. . BE ANOTHER SUBSCRIBER TO CHANNEL".

The clip shows a bearded man in a baseball cap telling police officers that he was waiting for another man to clear up an incident that happened the previous day.

One police officer then asks, "When will he arrive?"

The video cuts to another scene of the bearded man fighting with another man.

Below is a screenshot comparison between the footage in the misleading posts (L) and the longer YouTube video from 2020 (R): 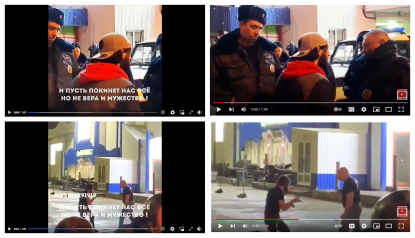 The video is titled, "A video of a brutal fight in Podolsk appears on the web - Moscow 24".

The video shows a different sequence, starting with the fight scene and followed by the man talking to police officers.

The man who fought with the security guard, identified as Arthur Selimov, told Russian news channel 360 that he had a fight with a security guard of a café in Ostrov Sokrovishch mall in Podolsk, in the Moscow region, after he and his friends were barred entry to the establishment on February 23, 2020.

The caption reads in part: "Eventually, Arthur himself and the security guard of the café came out to have a one-on-one duel. The young man almost immediately knocked out the employee of the private security company. And then the crowd rushed to separate them, including the national police officers."

A Russian-speaking AFP journalist said the police officers in the video do not mention Islam.

Here is the location of Ostrov Sokrovishch mall on Google Street View.