Footage of Nigerian President Muhammadu Buhari’s convoy has been circulated on social media with claims that it shows the African leader acknowledging the Biafran state by displaying the separatist flag on his car during a recent visit to Nigeria’s southern Imo state. The claim is false; the flag in question is one of the official presidential flags that recognises the commander-in-chief of the country’s armed forces.

Social media monitoring tool CrowdTangle revealed that the claim was largely circulated online by pro-Biafran accounts on September 9, 2021, the same day Buhari visited Imo state, where separatist tensions and attacks on police have been on the rise.

“Biafra flag spotted on Bughari’s Land Cruiser today in Imo State (sic),” reads the caption on a Facebook post featuring the video, which has been shared more than 1,500 times since Buhari’s visit. 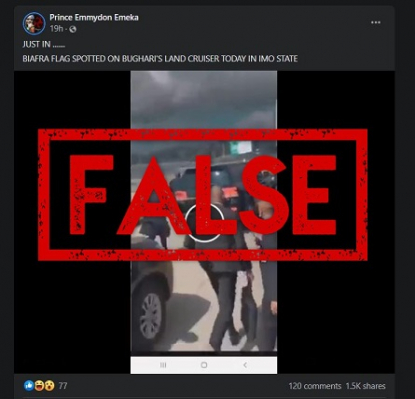 The video’s voiceover claims that the president mounted both the Nigerian and Biafran flags as well as the Nigerian Coat of Arms on his car.

The same 23-second video footage was also shared on Twitter with a claim that Buhari had “finally accepted the restoration of Biafra.”

Imo is in Nigeria’s southeast region where the Igbo ethnic group largely resides. The state has been the battleground for pro-Biafra Eastern Security Network, the militia arm of the proscribed Indigenous Peoples of Biafra (IPOB) group that seeks independence from Nigeria for the Igbo people.

The Republic of Biafra was formed following a unilateral declaration of independence from Nigeria in 1967, a move that resulted in a civil war that lasted for two-and-a-half years and claimed at least a million lives.

Although the Biafran state ceased to exist in 1970, calls for secession over alleged marginalisation still continue, with IPOB supporters regularly flying the Biafran flag during demonstrations. 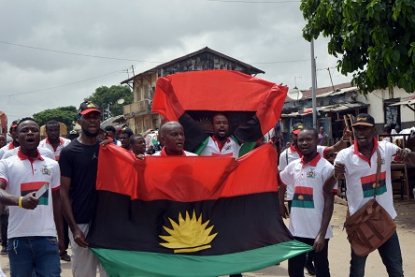 The flag of the former Republic of Biafra has three horizontal bands in red, black and green. In the centre, it features a golden rising sun atop a horizontal line.

In reality, none of the flags displayed on the presidential car belongs to the separatist group. AFP Fact Check examined the two flags mounted on either side of Buhari’s car and found that they are actually Nigeria’s national flag and that of the Commander-in-Chief of the Nigerian Armed Forces.

In the Facebook video, three colours — red, black and green — are visible on the flag flying on the left-hand side of Buhari’s car. Although the arrangement of the colours is similar to the Biafran flag, the black band does not feature a rising sun. 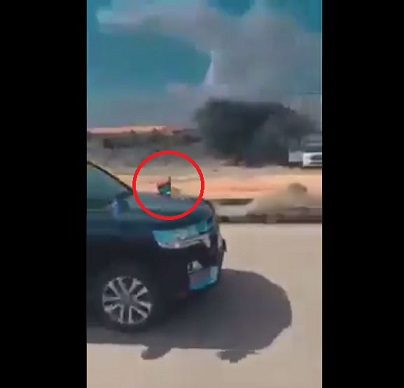 Buhari’s Toyota Land Cruiser can be seen 39 seconds into the video. It has the Nigerian coat of arms as its license plate and two flags placed on either side of the car, between the vehicle's fender and the bonnet. 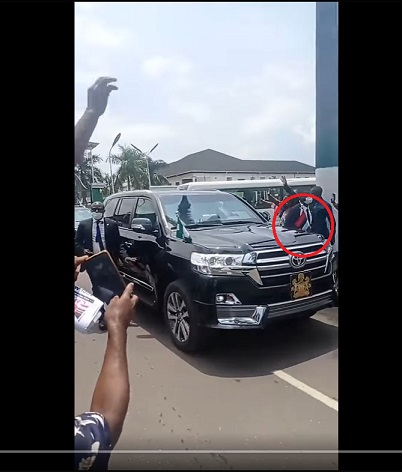 Screenshot taken on September 10, 2021, showing the flag in BBC's video

On the vehicle’s right-hand side is Nigeria’s national flag featuring two horizontal green bands with a white one in the middle, and on the left is another flag with four horizontal bands — red, black, white, and green.

This four-coloured flag represents the commander-in-chief of the Nigerian Armed Forces who is also the president.

Placing the two flags in this manner or placing them behind the president’s seat is typical during official presidential outings, as shown below in an AFP photo of Buhari during a cabinet meeting. 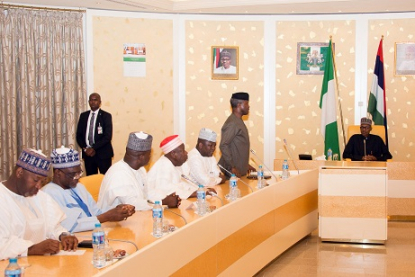 AFP Fact Check previously debunked a similar claim purporting that the flag of an Islamist group was hoisted at the headquarters of Nigeria’s National Emergency Management Agency.