A photo of three flags placed side-by-side has been circulating in social media posts alongside a claim that the image shows the flag of an Islamist group hoisted at the headquarters of Nigeria’s National Emergency Management Agency (NEMA). However, the claim is false: the photo, taken during the agency’s bilateral meeting with Saudi officials in the capital Abuja, shows the national flags of Nigeria and Saudi Arabia alongside that of  NEMA.

The image appears in multiple online posts that accuse President Muhammadu Buhari of turning Nigeria into an Islamic state.

Users purport that one of the flags seen in the image is the symbol of the Islamic State West Africa Province (ISWAP) - an offshoot of Nigerian Islamist group Boko Haram affiliated with the Islamic State. The Boko Haram splinter faction has attacked several military camps in northeastern Nigeria, killing troops.

“A trusted friend sent this to me this morning. This picture was taken yesterday at NEMA office Abuja. Tell me, what is that flag doing THERE? What is the relevance of an ISWAP flag in the NEMA office of a secular state as NIGERIA (sic),” a Facebook post with the image reads. It has been shared more than 2,500 times since its publication on August 16, 2021. Flags in the viral photo

The first flag in the photo is that of the president of Nigeria — which is a variant of Nigeria’s flag — while the second belongs to NEMA, the national body in charge of disaster management.

This flag combination is typical in the offices of Nigerian government agencies as shown below in an AFP photo of the ex-managing director of the Nigerian Ports Authority, Hadiza Bala-Usman. 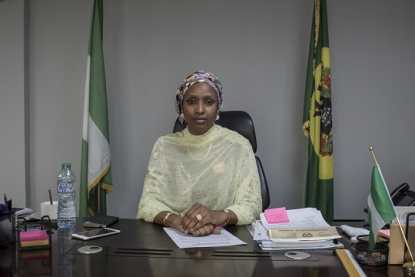 However, the presence of the third flag, featuring a sword and an Arabic inscription written in white, sparked online rumours about Islamists infiltrating the government.

No ISWAP flag in display

In the Facebook post, four photographs can be seen above the flags. The first shows the president’s flag, followed by his official portrait. The third features disaster management minister Sadiya Farouq, while the last one is of  NEMA director general Mustapha Habib.

The arrangement of the portraits provided clues that the photo possibly originated from NEMA, which is an agency under Farouq’s ministry.

AFP Fact Check sifted through NEMA’s Facebook timeline and found a set of images with features similar to the photo, including the flags and wall portraits. 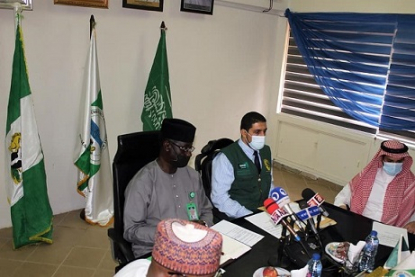 The photos were taken at the launch of the NEMA upgraded call centre in Nigeria’s capital Abuja on August 13, 2021.

KSRelief is Saudi Arabia’s charity arm providing humanitarian aid and relief to those in need outside the country, including in Nigeria, as reported by local broadcaster TVC News.

A search through flags of the world reveals the Arabic-inscribed flag belongs to the Kingdom of Saudi Arabia, whose ambassador to Nigeria was represented at the launch. 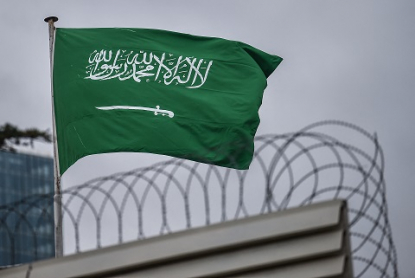 The images on the NEMA Facebook post further reveal that the three flags were placed behind the representatives of Nigeria and Saudi Arabia at the bilateral event. Also, the inscription on the flag matches the emblem on the Saudi representative’s jacket.

Differences between Islamist and Saudi flags

The flag is different from the ISWAP one, seen below in an AFP photo of a vehicle allegedly belonging to the Islamist group. The 2019 picture was taken by AFP photographer Audu Marte in Baga — a border community in Nigeria's northeastern Borno state.

Apart from the colour difference, the flag seen in the office also features a white sword typical of Saudi Arabia’s emblem.

NEMA dismissed the claim circulating on social media that it hoisted a “strange flag” at its headquarters.

“The Nigerian National Flag and that of NEMA are the only flags in the offices of the agency,” NEMA spokesman Manzo Ezekiel said in a Facebook post published on August 18, 2021.

“Flags are very important national symbols. Therefore, it was normal to have flags of Nigeria and that of Saudi Arabia placed behind representatives of the two nations at a bilateral function such as the commissioning of the upgraded Call Centre that was funded by an agency of the Kingdom of Saudi Arabia for the benefits of Nigerians.”

Meanwhile, NEMA has since uploaded images from a more recent event showing only the Nigerian national flag and that of the agency.