Skip to main content
A blue whale exhales through its blowhole in the Pacific Ocean off the coast of Long Beach, California. ( AFP / Robyn Beck)

Seawater is salty not 'because of sperm from blue whales'

Multiple social media posts circulating online since at least 2009 claim seawater is salty because of sperm ejaculated by blue whales. The claim is false. The ocean's salinity — the concentration of salt in seawater — is mainly caused by mineral ions that have dissolved in rainwater. Other causes of salinity include hydrothermal vents on the ocean floor and eruption of underwater volcanoes, according to the US Geological Survey (USGS).

The Indonesian-language text superimposed on the photo translates to English as: "Blue whales expel 40 gallons of sperm each time they ejaculate, but only 5%-10% that makes it into his mate. That’s why seawater is salty."

The post contains two photos. The image on the left-hand side corresponds with this Alamy picture of a gray whale's penis.

The photo on the right-hand side is known as "the surgeon's photograph". It was once claimed it shows the Loch Ness monster but was later revealed to be a hoax, according to the Britannica Encyclopedia. 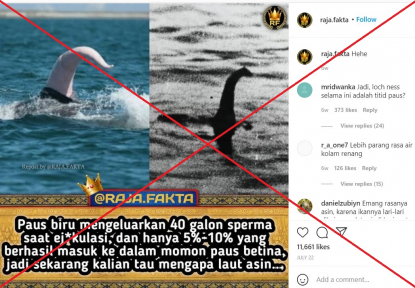 Why seawater is salty

Mineral ions — which dissolve in rainwater after it falls on land — are the main cause of ocean salinity.

The ions are "carried away to streams and rivers that eventually feed into the ocean", explains a page on the US National Ocean Service. "Many of the dissolved ions are used by organisms in the ocean and are removed from the water. Others are not removed, so their concentrations increase over time."

The US Geological Survey (USGS) lists other sources of ocean salinity as hydrothermal vents on the ocean floor; and the eruption of underwater volcanoes.

There are no credible sources to support the claim that "a blue whale's sperm" contributes to the ocean's salinity.

"This statement about making the seawater salty is absolute nonsense. This seems to be someone's uneducated fantasy," said Richard Sears, president of Mingan Island Cetacean Study, a research organisation in Canada dedicated to the study of marine mammals.

Experts said it was not clear how much sperm is typically ejaculated by a blue whale when it mates.

Dr Vanessa Pirotta, wildlife scientist at the Department of Biological Sciences of Macquarie University in Australia, said the figure of "40 gallons" cited in the misleading posts had not been "scientifically proven".

"Blue whales are large mammals and one would assume their potential for sperm production would be sizeable," she said.

Dr Putu Liza Mustika, a cetologist with the James Cook University, in Australia, told AFP: "Even to collect the sample is difficult. This animal lives in the ocean. Everything about him, or her, essentially, really, is based on estimation."