A video has been repeatedly shared on Facebook alongside a claim it shows British police violently arresting Hong Kong pro-democracy protesters in a London subway in August 2021. But the claim is false: the video has circulated online since October 2020 in posts about law enforcement officers arresting football fans in the Romanian capital of Bucharest.

The video was shared here on Facebook on September 3, 2021. 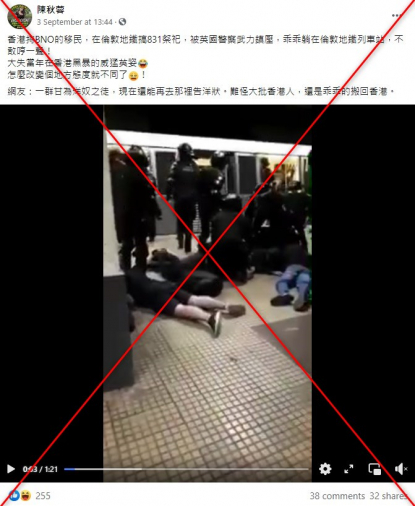 The video's Chinese-language caption translates in part as: "Hong Kong BNO immigrants held an anniversary protest for 831 worship in a London Underground station. They were suppressed with force by the British police."

"BNO" -- an acronym for British nationals overseas -- is a travel document issued to residents of Hong Kong that allows holders an immigration route to the UK.

The phrase "831 worship" refers to the night of August 31, 2019 when police were filmed beating multiple people in the Prince Edward subway train station in Hong Kong.

The video circulated as a crowd gathered at Piccadilly Circus in central London on August 31, 2021 to remember the Prince Edward incident, the Hong Kong Free Press reported.

Similar videos were also shared alongside the same claim on Facebook here, here and here.

A Google reverse image search of the video's keyframes found it corresponds to a portion of a longer video published here on the verified Facebook page of Romanian politician Vlad Gheorghe on October 2, 2020.

The longer video's Romanian-language caption translates in part as: "The police went completely crazy... they followed football fans on the subway and started beating them."

Throughout the video, police officers could be heard shouting in Romanian: "opriti" (stop), "iesiti afara" (come out), "hai, hai" (come on), "jos" (come down), "culcat" (on the floor) and "Pune-le catuse" (handcuff them).

Below are screenshot comparisons of the video in the misleading posts (L) and the Facebook video (R).

This official report by the General Directorate of Gendarmes of Bucharest on October 2, 2020 states the incident happened as law enforcement officers attempted to prevent escalating violence between groups of rival football fans.

The report states the incident took place at the Ștefan cel Mare subway station in Bucharest.

The location corresponds to this footage tagged near the Ștefan cel Mare subway station on Google Maps.

Below is a screenshot comparison of the video in the misleading posts (L) and the footage on Google Maps (R) with the corresponding elements highlighted. 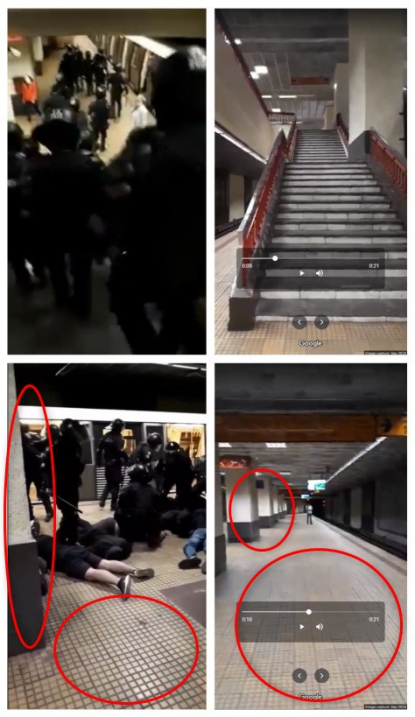 Portions of the video had also been shared by Romanian sports journalists Emanuel Roşu and Cristian Scutariu in October 2020.

AFP has previously debunked posts that have shared the video in a misleading context here in November 2020.