Social media posts circulating ahead of the 20th anniversary of the September 11 terrorist attacks claimed the Taliban announced a "nation-founding ceremony" would be held annually on that day to "humiliate the United States". The claim is false: as of September 12, 2021, there has been no such announcement or ceremony. The posts included a photo of the Taliban's first press conference after the hardline Islamist group seized control of Afghanistan, in which they made no reference to a new national day.

"The Taliban decided to hold a nation-founding ceremony on the day of the September 11 terrorist attacks to humiliate the United States," reads a Chinese-language tweet posted on September 4, 2021.

Chinese text superimposed on the photo also claims the Taliban announced a new national day would be held on September 11. 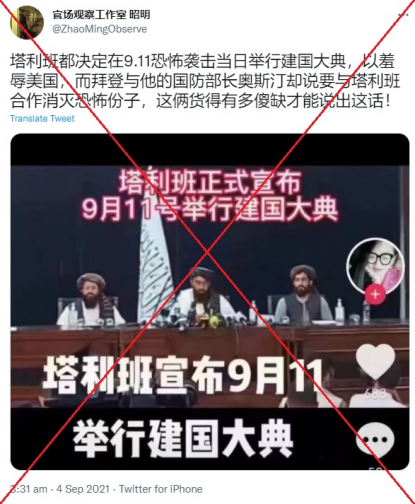 Screenshot of the false claim shared on Twitter, taken on September 9, 2021

As of September 12, 2021, the Taliban has made no such announcement.

There have also been no credible reports that the Taliban held a national day ceremony on September 11.

A reverse image search on Google found the photo in the misleading posts was taken from this video posted by Chinese state media CGTN on August 18.

It is titled: "The Taliban hold 1st press conference in Kabul".

The Taliban held its first news conference in Kabul on August 17, following the hardline Islamist group's swift takeover of Afghanistan.

Taliban spokesperson Zabihullah Mujahid said the group would not seek "revenge" against opponents.

He went on to say that the new regime would be "positively different" from the Taliban's brutal and oppressive rule between 1996 and 2001.

He discussed various other topics, including the formation of a government and women's role in society, but did not say that September 11 would be made a national day, as the posts claim.