A video has been viewed hundreds of thousands of times in social media posts alongside a claim it shows people were banned from displaying the Indonesian flag on the country's Independence Day in a district in the capital Jakarta. The claim is misleading: the video shows an incident in which Jakarta authorities prevented a group from displaying a large national flag because they said it could attract a crowd, breaching pandemic restrictions. AFP found videos on social media that show other Indonesian flags were displayed in the same district on Independence Day.

A man behind the camera claims that people were not allowed to unfurl the country's flag on Independence Day.

The post's Indonesian-language caption reads: "PATHETIC.... ON THE 76TH ANNIVERSARY OF INDONESIAN INDEPENDENCE.

"The red-and-white flag was prohibited from being hoisted at pantai indah kapuk, JAKARTA.
(The residents are majority Chinese/Chinese foreign workers).

"THAT MEANS CHINA HAS DARED TO TREAD ON THIS COUNTRY'S DIGNITY. We seek refuge in Allah..." 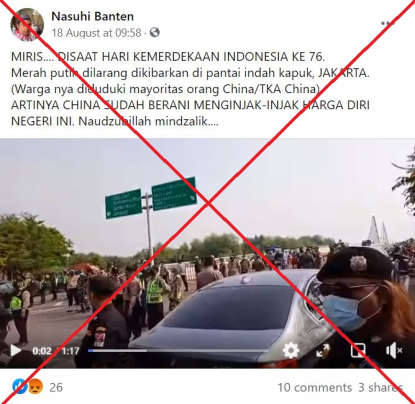 The Indonesian flag is usually hoisted across the Southeast Asian country to celebrate Independence Day, which is marked on August 17.

Pantai Indah Kapuk — popularly known by its acronym PIK — is a district in the northern part of the Indonesian capital, Jakarta.

An Indonesian paramilitary organisation called Laskar Merah Putih, or Red-White Soldiers, planned to display a 21-metre-long Indonesian flag at a bridge in PIK on August 17, 2021.

The group, however, was prevented from displaying the flag by authorities, as reported by Indonesian media outlets Detik.com here and Okezone here.

The group's leader said it wanted to challenge "people's assumptions that PIK belongs to foreigners" and hoisting the flag would prove that the district "is part of Indonesia's territory", according to the media reports.

In a video posted on his YouTube channel on August 18, 2021, Jakarta's Deputy Governor Ariza Patria clarified there was no ban on displaying the national flag.

He said: "There is no prohibition to display the red-and-white flags. We allow flags to be on display. What was prohibited was a throng of people while they displayed the 21-metre-long flag."

Ariza went on to say: "Please display the flag as long as it does not create a gathering of people, coordinate it well".

"We banned people from gathering and we didn't want a new [Covid-19] cluster, the point was like that," he said on August 18, 2021, as quoted by local news outlets Tempo.co and CNN Indonesia.

Indonesian flags were actually spotted on the streets of PIK on Independence Day on August 17, 2021, as shown in clips posted on YouTube here and here.

Below are screenshots of the two YouTube videos, with the the Indonesian flags marked in red by AFP: 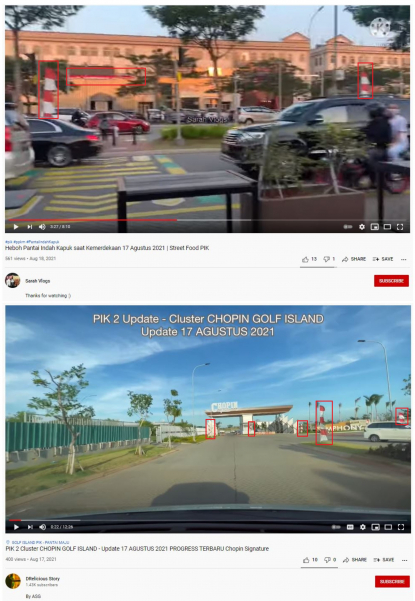