New Zealand pledged millions to aid agencies in Afghanistan, not the Taliban

Multiple posts on Facebook and YouTube claim New Zealand's government gave "three million dollars" to the Taliban after the group seized control of Afghanistan. The claim is misleading: the government pledged the cash to aid agencies, the Red Cross and the UN Refugee Agency, not the Taliban.

"Breaking news ... The crime sinister has just paid out the Taliban three million dollars !!!" reads a Facebook post published on August 23 by a New Zealand-based user.

"She is a danger and a traitor to NZ and we shall not trust her with our lives !!!" 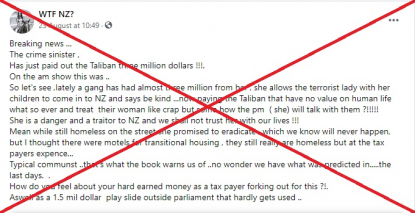 In an interview with Al Jazeera, Taliban spokesman Abdul Qahar Balkhi subsequently said he was grateful to New Zealand "for showing empathy with their fellow human beings". New Zealand-based news outlet Newshub reported on the interview here on August 23.

A similar claim was shared in this Facebook post. It shows a photo of Ardern alongside the message: "I've given 3 million to the kind and generous Taliban".

It was also shared in this YouTube video titled: "Jacinda gives $3million to Taliban in aid".

The New Zealand government said it would donate the money to aid agencies, not to the Taliban.

New Zealand's Foreign Minister Nanaia Mahuta said in a press release on August 20 that the money would be given to the Red Cross and the United Nations Refugee Agency (UNHCR).

"These organisations are providing life-saving humanitarian support for crisis-affected communities in Afghanistan, and those seeking refuge in neighbouring countries," the press release reads.

The International Committee of the Red Cross (ICRC) said the money would help support medical programmes in Afghanistan.

"Donations from the New Zealand government help us carry out the programs we have in place to assist victims of the conflict. This includes our ICRC-supported medical and rehabilitation programs," a spokesperson told AFP.

She told NewsTalkZB: "The reality is that New Zealand, like many governments, has sent or is sending money to the Red Cross and to the High Commission for Refugees the UN runs and the World Food Programme".