A video of police chasing people in a park has been shared in multiple social media posts that claim it shows forced vaccinations in Israel. The claim is false: the clip was in fact filmed in Australia. It has circulated in reports about police clashing with protesters at an anti-lockdown march in Sydney.

"A scene where the authorities are forcing vaccination on people in Israel," reads the Korean-language caption to this video posted on August 31 on Naver Blog.

The video shows police officers chasing several people and tackling them to the ground in a park. 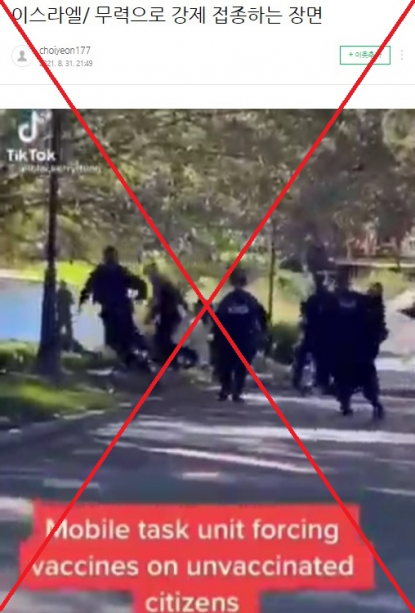 Screenshot of the misleading Naver Blog post, taken on September 6, 2021.

The video was also shared in similar posts here, here and here.

A Google reverse image search on a screenshot of the clip found the same footage posted here on July 24 on video-sharing platform Brand New Tube.

The video is titled, "MORE POLICE BRUTALITY IN SYDNEY AUSTRALIA".

Around 23 seconds into the video, a female voice off-camera can be heard saying, "This is Victoria Park in Broadway... the protest hasn't started yet".

A search on Google Street View found the scene in the video (below left) corresponds to this location in Victoria Park in Sydney (right). Broadway is a nearby street.

Screenshot comparison between the scene in the misleading Naver Blog post (L) and the Google Street View of Victoria Park in Sydney (R).

A similar scene of police arresting protesters at Victoria Park can be seen at 00:38 and 02:43 of a video clip posted here on YouTube by 7 News Australia on July 24.

A news report linked to the 7 News Australia's YouTube clip reads in part: "Protesters are massing in capital cities around Australia to object to lockdowns prompted by COVID-19.

A caption of one of the images cited in the report also reads: "Protesters are arrested by police at Victoria Park on Broadway during the 'World Wide Rally For Freedom' anti-lockdown rally at Hyde Park in Sydney, Saturday, July 24, 2021."

Other local media outlets have also reported the July 24 anti-lockdown protests in Australia, including ABC News and the Sydney Morning Herald.