A video has been viewed thousands of times in multiple Facebook and Twitter posts that claim it shows the Taliban playing with a captured American helicopter on the tarmac. However, the claim is false; the video has circulated online since 2020 in reports about a helicopter captured in Libya.

The post's Hindi-language caption reads: "Taliban have got American treasure in their hand and yet they are behaving the way just as monkeys would if they get fine silk in their hand. Taliban captured expensive aircraft like Black Hawk and Apache but they are playing with them on the tarmac. I read on a website that Black Hawk, Apache and F-16 or companies that manufacture such sophisticated fighter aircraft can be controlled from a headquarter. They can even be destroyed by corrupting their software. If this is true, then this must be a strategic plan by the US." 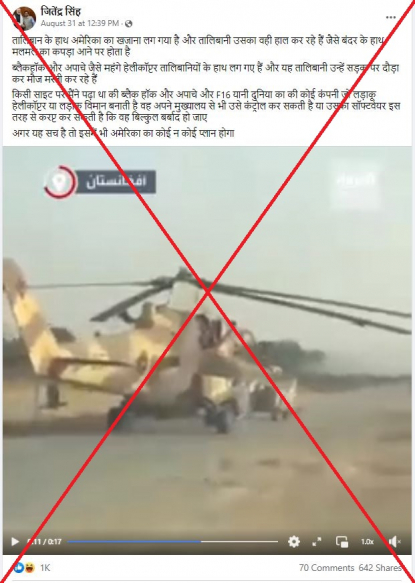 The video shows a grounded helicopter being towed by a vehicle in front of it. The recording appears to be taken by a person in a car behind the helicopter.

The video has been viewed hundreds of times alongside a similar claim on Facebook here, here and here.

The video has circulated in reports about a Russian helicopter captured in Libya.

Combined reverse image and keyword searches found the same video published in a report by Russian news site Piter.TV on June 5, 2020, about a Mi-35 helicopter being towed by forces aligned with the Government of National Accord (GNA), an interim government for Libya at the time.

The report reads in part: "The helicopter was caught on video by the PNS (Government of National Accord) forces.

"The Libyan government has acquired the Mi-35 of Field Marshal Khalifa Haftar. This was reported on the evening of June 4 by representatives of the Military Informant Telegram channel. According to information from journalists, the Government of National Accord was able to seize a helicopter belonging to the forces of the Libyan National Army (LNA)."

"It is known that the combat vehicle was located at the Tripoli airport. This facility, like the entire Libyan capital, was under the control of the PNS."

Mi-35 helicopters are manufactured in Russia.

Below is a screenshot comparison between the video in the misleading post (L) and the video in Piter.TV's report (R):

This report about the GNA capturing Mi-35 helicopters, published by Vietnamese online news site Dat Viet on June 5, 2020, also uses a still image of the helicopter that matches the helicopter seen in the video.

The Vietnamese-language report is headlined: "Libya’s Government of National Accord (GNA) captured dozens of tanks and Mi-35 helicopters."

The photo's caption reads: "Mi-35 helicopter of Libyan National Army (LNA) captured by GNA and being shown on streets". 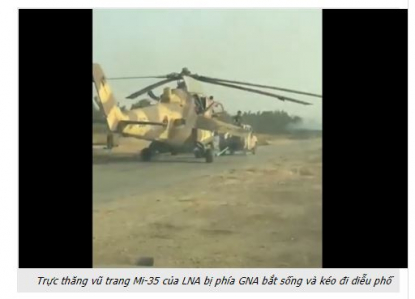 AFP has debunked posts claiming to show a video of the Taliban executing a man hanging from a fixed line below a helicopter in Afghanistan.