The video shows a huge explosion in Beirut in 2020

A video of a huge explosion has been viewed tens of thousands of times on Twitter and Facebook, alongside a claim it shows a suicide bombing in the Afghan capital Kabul in August 2021. The claim is false: the video has circulated in media reports since August 2020 about an explosion in Beirut, Lebanon.

"The moment of the Kabul blast, the bomb was powerful. Terrorists continue to do evil," reads the simplified Chinese-language Twitter post here. 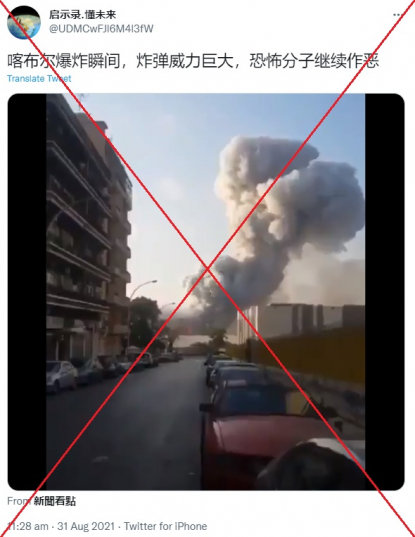 A suicide bomber from the local chapter of the Islamic State group targeted US troops at Kabul airport on August 26, 2021. AFP reported on the attack here.

The video was also shared alongside a similar claim here, here and here on Twitter; and here on Facebook.

The claim is false: the video has circulated in reports since 2020 about an explosion in Beirut.

The August 2, 2021 video is titled: "August 4 marks one year on from the Beirut blast and no one has been held to account".

Below is a screenshot comparison of the video shared in the misleading posts (L) and the YouTube video uploaded by CNBC (R):

The video was shared here by Instagram user Youssef Kawtharani on August 20, 2020.

The video's caption reads: "Beirut Blast Close Up - I SURVIVED.

"I was lucky to survive the explosion in Beirut. My video got thousands of shares, and many assumed I had died in the blast, but thanks to God I survived.

He also posted the same clip on his YouTube channel here.