Skip to main content
An Afghan Commandos (ANA) soldier stands guard as an Afghan Air Force Black Hawk helicopter takes off at the Shorab Military Camp in Lashkar Gah, in the Afghan province of Helmand on March 25, 2021 ( AFP / WAKIL KOHSAR)

Two photos have been shared in multiple Facebook posts that claim they show an Afghan pilot who was "stoned to death" by the Taliban. The posts circulated online after the Taliban seized power in Afghanistan in August 2021. The claim is false: the first image shows an Afghan pilot at a military airbase in Kabul in 2016, while the second image has circulated online since 2015 in reports about the killing of a different woman.

"Sofia Firozi, first Afghan woman military pilot, was stoned to death by the Taliban according to Sharia law. Shame on Taliban," reads the Bengali-language caption.

The post shows a graphic photo of a woman with a bloodied face alongside a photo of a female pilot wearing a headscarf and military uniform. 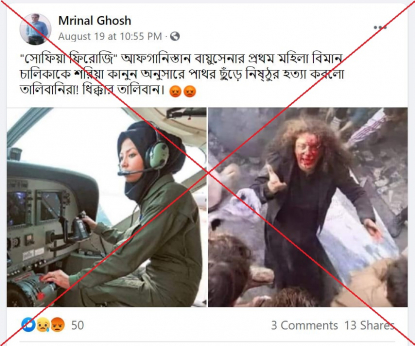 Screenshot of the false claim shared on Facebook, taken on September 2, 2021

The photos were shared alongside a similar claim on Facebook here, here and here.

Google reverse image searches found the first photo of a female pilot was published in the archives of the Associated Press news agency.

The image shows Afghan pilot Safia Ferozi preparing for a flight at the Afghan military airbase in Kabul on November 21, 2016, according to the photo's caption.

Ferozi featured in an AP report in December 2016, in which the then-26-year old talked about becoming Afghanistan's second female pilot after growing up in a refugee camp.

AFP found no credible media reports that Ferozi had died, as of September 2, 2021.

The second photo has in fact circulated in reports since 2015 about a woman who was killed in Kabul after being falsely accused of blasphemy.

The image was published in a report on May 7, 2015 by British newspaper The Times.

It was headlined: "Men to hang for mob murder of woman".

Four men were sentenced to death for the killing of a woman named only as Farkhunda, the report states.

She was beaten and set on fire in an "extended attack" on March 19, 2015 in Kabul after being falsely accused of burning a Koran.

A graphic video of the killing was published by the New York Times in a report on December 26, 2015.

It gives the woman's full name as Farkhunda Malikzada. The image circulating in the misleading social media posts can be seen at the video's four-minute mark. 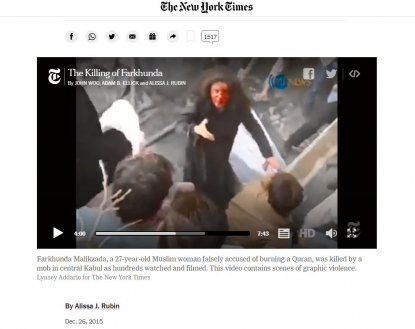 AFP reported that the woman was beaten with sticks and stones before being thrown from a roof and run over by a car outside a mosque.

The killing triggered protests around Afghanistan and drew global attention to violence against Afghan women.