A photo has been shared repeatedly in social media posts that claim it shows lenient security measures at an Afghan airport. The posts circulated online as thousands attempted to flee Afghanistan after the Taliban seized power. Comments on these posts suggested some social media users believed the claim. But the photo -- which was shared by pages that post satirical content -- has circulated in reports since 2015 about Yemen.

"Security check at the airport in Afghanistan," reads the Thai-language caption alongside this photo shared on Facebook on August 20.

The photo appears to show a man carrying a rifle being body-searched by uniformed personnel. 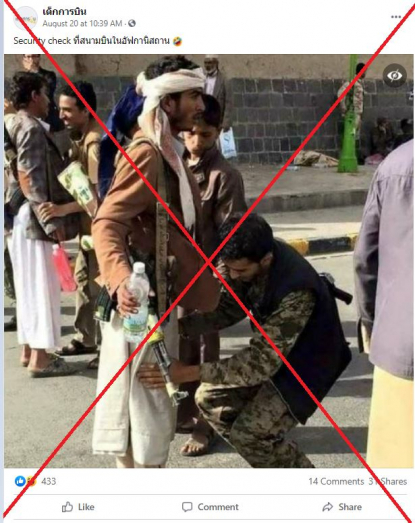 The photo circulated online as the US and its allies evacuated more than one hundred thousand people from Afghanistan in just two weeks.

An identical photo was also shared alongside a similar claim here on Facebook; here and here on Twitter; and in this online forum.

Comments on the posts indicated some social media users were misled.

"Why does it look like the guy without a weapon is checking the armed guy," one wrote.

The image, however, was shared by online pages with a history of sharing satirical content -- for example here and here.

It has circulated in reports about Yemen since 2015.

A reverse image search found the original photo was published on Twitter on July 1, 2015 by CBS News journalist Amjad Tadros.

"I confirm that I took the photo in Sana'a Yemen at a Houthi rally back in 2015," Tadros told AFP on September 2.

Houthi refers to a rebel group in Yemen.

Below is a screenshot comparison of the photo in the misleading posts (L) and the 2015 photo (R):

Further keyword searches found the photo corresponds to frames in this report published by CBS News on YouTube June 16, 2015.

The report was titled: "Rare look inside battle-torn Yemen"

Below is a screenshot comparison of the photo in the misleading posts (L) and a frame from the YouTube video (R) with corresponding elements circled in red by AFP:

Misleading post's photo (L) and a screenshot of the YouTube video, with similar elements circled in red by AFP (R)