A photo of US soldiers at a meal has been shared hundreds of times in multiple social media posts claiming it shows them eating at a homeless shelter in Islamabad, the capital city of Pakistan. The posts circulated as the US completed its withdrawal from Afghanistan after two decades of war. The claim is false: the image is a doctored version of a photo taken in 2013 during a Thanksgiving Day meal at an airbase in Afghanistan.

The post's Urdu-language caption translates to English as: "American refugees are eating a meal at a shelter in Islamabad."

The photo shows a group of US soldiers, heads bowed, sitting around a table laid with food. The blue logo of Panahgah, a government-run shelter in Pakistan, can be seen on the wall behind them.

Panahgah's logo can be seen here in a news report by Pakistan's Daily Times newspaper. It translates from Urdu as: "Panahgah: Another step towards a welfare state." The Urdu word of "panahgah" translates to English as "shelter". 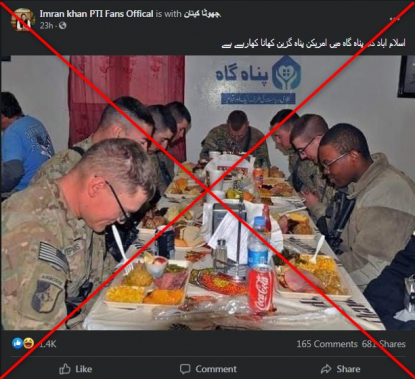 The post circulated as the US military was in the final stages of completing its withdrawal from Afghanistan after a brutal 20-year war, with some of its soldiers travelling into Pakistan.

The same photo along with a similar claim was posted here on Facebook and here and here on Twitter.

But the claim is false -- the image has been altered.

A Google reverse image search led to this article published on November 29, 2013 by Clarksville Online, a local US media outlet.

It contains an image identical to that in the posts, without the homeless shelter logo on the wall behind the soldiers. 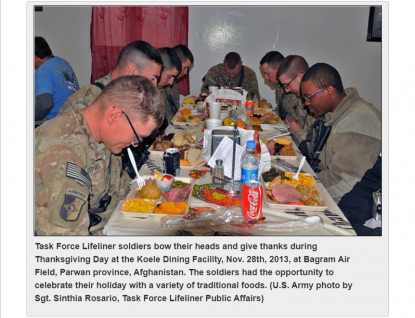 The photo was taken by US Sergeant Sinthia Rosario of the 101st Sustainment Brigade, 101st Airborne Division (AA) Public Affairs, who also wrote the article.

The caption on the photo reads: "Task Force Lifeliner soldiers bow their heads and give thanks during Thanksgiving Day at the Koele Dining Facility, Nov. 28th, 2013, at Bagram Air Field, Parwan province, Afghanistan. The soldiers had the opportunity to celebrate their holiday with a variety of traditional foods. (U.S. Army photo by Sgt. Sinthia Rosario, Task Force Lifeliner Public Affairs)"

The same photo credited to Rosario was also published here and here.

Pakistan's Interior Minister Sheikh Rashid Ahmed has said that any US troops arriving from Afghanistan will not be staying long, Dawn newspaper reported here.