Skip to main content
People hold placards reading in French "I am Charlie" in Paris, on January 7, 2015, following an attack on the offices of the satirical weekly, Charlie Hebdo. ( AFP / Joël SAGET)

An image has been shared in multiple social media posts about protests against so-called vaccine passports in France. The posts, however, are misleading: the image was taken by an AFP photographer at a demonstration in Paris following the Charlie Hebdo attacks in January 2015.

“Go France! The whole world is watching, go go go!” reads an screenshot in a Facebook post published on August 27, 2021.

“France is on the brink of revolution. Hospital workers are not just refusing the jabberwocky, they are refusing to administer it. People in cities around the country are in the streets protesting govt mandated vpassports [vaccine passports].” 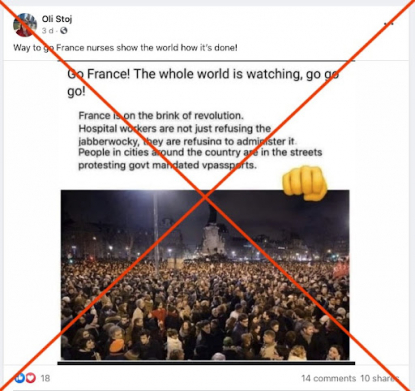 A screenshot of the misleading post as of August 31, 2021

Hundreds of thousands of people demonstrated against the health pass championed by President Emmanuel Macron. AFP reported on the protests here.

A reverse image search on Google found the image published in articles by CNN and The Guardian about a demonstration in Paris following the Charlie Hebdo shootings in 2015.

The photo was originally taken by photographer Eric Feferberg for AFP on January 7, 2015. 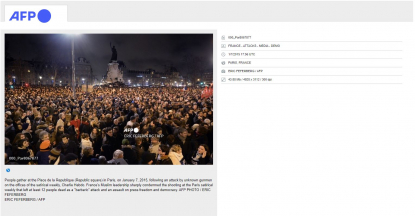 The caption reads in part: “People gather at the Place de la Republique (Republic square) in Paris, on January 7, 2015, following an attack by unknown gunmen on the offices of the satirical weekly, Charlie Hebdo”.

Below is a comparison of the misleading post (L) and the AFP photograph (R):