This video has circulated in reports about wildfires in Turkey

A video has been viewed hundreds of times on Facebook alongside a claim that it shows a camp of an ethnic rebel group in Myanmar being burned down. However, the claim is false; the video has circulated in reports about wildfires in Turkey.

The video was published here on Facebook on August 24. It has been viewed more than 900 times. 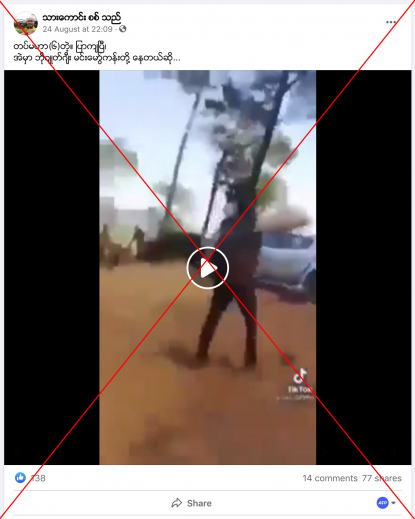 The video appears to show people yelling indistinctly and running away from a huge fire.

Its Burmese-language caption translates to English as: "This shows Brigade 6. Its camp was burned down to ashes."

"Brigade 6" refers to a brigade of the KNU, an armed Karen ethnic rebel group in Myanmar.

Myanmar has been in turmoil since a coup in February deposed Aung San Suu Kyi's government and ended the country's decade-old experiment with democracy.

A Karen local news outlet reported on August 23 that residents in areas controlled by KNU's Brigade 6 fled to safe places, concerned that fighting would erupt between the Myanmar army and the brigade.

The same video has been shared here, here, here and here on Facebook, alongside a similar claim.

The video has circulated in reports about wildfires in Turkey and does not show a rebel camp burned down in Myanmar.

Combined reverse image and keyword searches found the video corresponds with portions of this report published on YouTube on August 2 by Turkish TV channel CNN Turk.

The video's Turkish-language title translates to English as: "The team who came from Azerbaijan was trapped by flames!"

Its caption states: "The Azerbaijani team made great efforts to put out the forest fire in Marmaris. The team trapped by the flames went through tough moments. Here are their scary moments."

Marmaris is a resort town in Turkey's Mediterranean coast.

Residents from some villages of Marmaris were evacuated as Turkey suffered the worst fires in at least a decade, AFP reported in early August.

Below is a screenshot comparison of the video in the misleading posts (L) and its corresponding frame in the CNN Turk report (R):

Further searches on Google found a longer version of the footage was also published in this Turkish website on July 31, with a caption that states it shows a wildfire in Marmaris.