Four images of vehicles engulfed by fire and crowds gathered under smoke are circulating on social media in Nigeria with claims that they show scenes of violent ethnic attacks in the country’s central Plateau state. However, the claim is false: the photos, taken in Zimbabwe and other parts of Nigeria, are old and unrelated to the current unrest in Plateau. 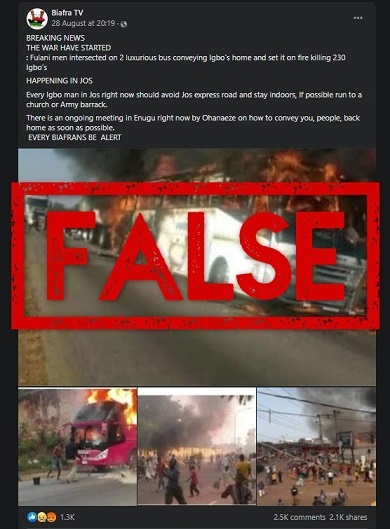 The Independent People of Biafra is an outlawed organisation that has been fighting for an independent Igbo state in Nigeria’s southeast since 1970.

“The war have started (sic),” reads the caption in the post, which has been shared more than 2,300 times since publication on August 28, 2021. “Fulani men intersected on 2 luxurious bus conveying Igbo’s home and set it on fire killing 230 Igbo’s (sic).”

Biafra TV’s post claims that the coach was purportedly set on fire in Plateau’s capital Jos and urges Igbo residents in the state to stay indoors or seek refuge in nearby churches or military camps.

Plateau state is located in the central part of Nigeria, called the Middle Belt, a region that has over the years witnessed repeated ethno-religious conflicts.

The set of images has been shared on Twitter and elsewhere on Facebook alongside the same claim about purported Igbo victims of recent violence in Plateau.

While an attack in August 2021 left at least 16 people dead in Jos, as AFP reported, the photos in the Facebook post have been falsely shared and are unrelated to the current violence in the central Nigerian city.

AFP conducted a Google reverse image search on one of the images showing a red coach in flames and found that it was published in this online article on March 16, 2019.

The incident involved a bus belonging to Nigerian transport company, Young Shall Grow Transport, according to the publication.

A Bing search for a similar photo involving a white-coloured coach returned old publications, and one of the earliest versions was found on the website of Zimbabwean online newspaper ZwNews. 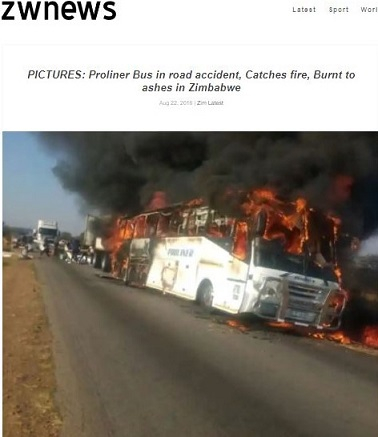 Screenshot taken on August 30, 2021, showing the image on ZwNews’ website

The image was published on August 22, 2016, and it shows a bus belonging to a local transport company going up in flames when returning to the capital Harare from South Africa.

A search for another photo, which shows a crowd gathering near a junction as smoke billows in the background, revealed the original version was published by Nigerian daily newspaper The Nation during a marketplace fire.

Using the photo’s GPS metadata information extracted from the InVID WeVerify tool, AFP Fact Check confirmed that it was actually taken on December 22, 2019, at the Ekiosa market in Nigeria’s southern Benin City, located more than 640 kilometres (400 miles) from Jos.

In addition, a comparison of the Facebook photo with the original version shows a yellow-and-red vehicle approved for operating intra-city services in Edo state, including Benin City, that was mostly cropped out. 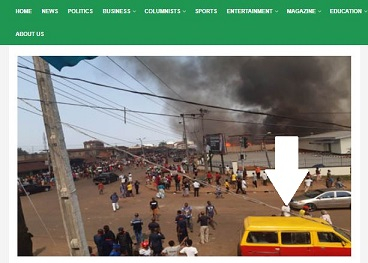 Screenshot taken on August 30, 2021, showing the image on The Nation’s website

The last image was traced to this 2016 blog about political unrest in Ajaokuta town in Nigeria’s central Kogi state.

“The command hereby states categorically that there is no record of such incident anywhere in Jos,” Ogaba said in a statement to the News Agency of Nigeria.

“We urge members of the public to disregard and stop the spread of such as fake news capable of inspiring unwarranted panic, hatred, negativity, chaos and tribal conflict among the well-spirited residents of Plateau and Nigeria in general (sic).”