A video has been shared on Facebook, YouTube and multiple blog posts with the claim that it shows Burmese anti-coup fighters attacking a military convoy in Myanmar. However, the claim is false. The images used in the video were taken from different events outside of Myanmar.

The continuing violence in Myanmar, after a military coup in February ousted civilian leader Aung San Suu Kyi, has pushed some in the anti-junta movement to form a so-called "People's Defence Force" (the 'PDF' mentioned in the post) in their townships. They are made up of civilians who fight back against security forces with homemade weapons.

'SAC' is the State Administration Council, the name the junta calls itself.

The video, which has been viewed more than 230,000 times, shows footage of shots fired in a mountainous area and a still image of military tanks.

A Burmese-speaking voice narrating the video says: "According to local sources, PDF forces from Gangaw in Magway Division attacked a military convoy today around 2:30 PM. One military personnel was reportedly killed and 10 were injured."

While there have been clashes between military forces and anti-junta forces across Myanmar, AFP was not able to verify if this specific attack occurred. 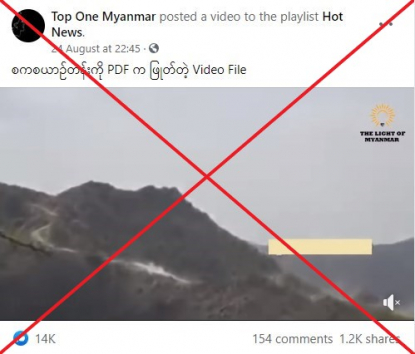 The video was also shared alongside a similar claim on Facebook here and here, on YouTube here and here and in blog posts here.

However, the claim that the video shows PDF fighters attacking a Burmese military convoy is false.

Keyword searches on Google show that the video clip at the start has been circulating online since at least 2016.

The video was published in an article from January 3, 2016 by Iranian news agency Tasnim News titled "The joint Yemeni forces impose their control on the Saudi mountain of Doud". The corresponding clip can be seen after 2'30 in the video.

"Military sources reported to Tasnim International News Agency that the Yemeni army and the People’s Committees imposed their control over parts of Jabal Al Doud inside the territory of Saudi Arabia, and these forces damaged four military vehicles of the enemy army," the article reads.

Below is a screenshot comparison of the misleading video (left) and the video on the blog post (right).

A Google reverse image search of the still of military trucks found that it actually shows fighting between Armenia and Azerbaijan in September 2020.

The original video was posted on September 27, 2021 by a YouTube channel affiliated with the Armenian Defence Ministry.

In September 2020, Armenia and Azerbaijan went to war over control of the disputed Nagorno-Karabakh region.

The conflict, which claimed the lives of some 6,000 people, ended in November with a Russian-brokered ceasefire agreement that saw Armenia cede swathes of territory that it had controlled for decades to Azerbaijan.