This video shows an explosion in Kazakhstan, not at the Kabul airport

Numerous social media posts about a blast outside the Kabul airport on August 26, 2021 feature an eight-second video of a large explosion. The footage, however, has been shared in a false context: it had been circulating in news reports about blasts that happened in Kazakhstan on the same day.

"#KabulAirportBlast Back to back 2 blast in outside kabul airport. More than 40 people died including 4 american soldiers," reads a tweet that shared the video on August 27, 2021. 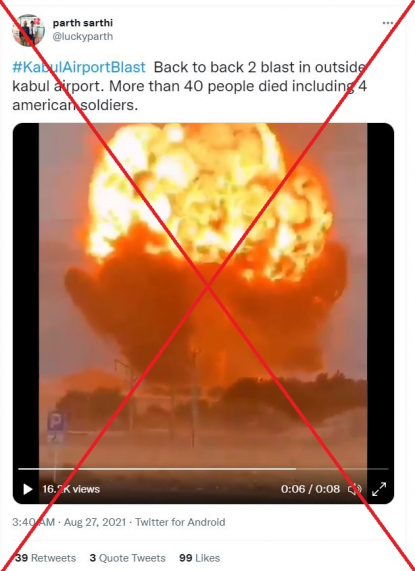 However, this video does not show the attacks outside Kabul airport. It has circulated in news reports about an explosion at a military facility in the city of Taraz, in Kazakhstan.

A reverse image search on Google found the same video was included in this report by news organization Al Jazeera about a number of powerful blasts happened at a military facility in Taraz on August 26 which wounded at least 60 people.

The report said that the facility had been storing engineering-purpose explosives, citing a statement by Kazakh deputy defence minister Ruslan Shpekbayev.

Another report about the blasts from Kazinform, a Kazakh news agency, also showed a still from the explosion that matches the video. 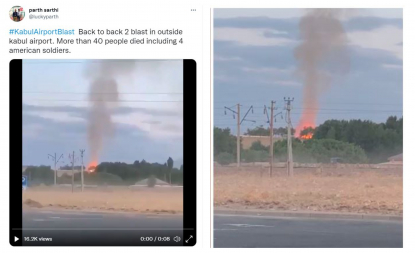 The video of the explosion was also shared by a number of news agencies on YouTube, including RT, Russia's state-controlled international television network. 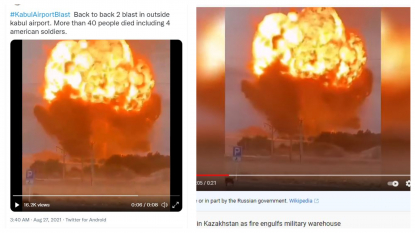 Posts misrepresenting the video are part of a series of inaccurate claims about Afghanistan that have spread across the internet after Taliban insurgents seized control of the country earlier this month.

AFP has previously debunked posts sharing a misrepresented photo of the attack in Kabul.