Multiple Facebook posts share an image that purports to show an announcement from Indonesian state-owned oil company Pertamina banning people from refuelling two-stroke motorcycles at its gas stations. However, the claim is false; Pertamina says the company has never issued such an announcement, declaring the image a "hoax".

The image of the purported letter was posted here on Facebook on August 21, 2021.

The logo of Pertamina, Indonesia's state energy company, can be seen on the upper right-hand side of the letter, which was dated August 22, 2021.

Translated to English, the Indonesian-language text in the letter states: “ANNOUNCEMENT:

"STARTING FROM 22 AUGUST 2021, ALL GAS STATIONS DO NOT SERVE TWO-STROKE MOTORCYCLES THAT WANT TO REFUEL WITH PERTALITE.”

"What happens with the retailers (PERTAMINI) ?" 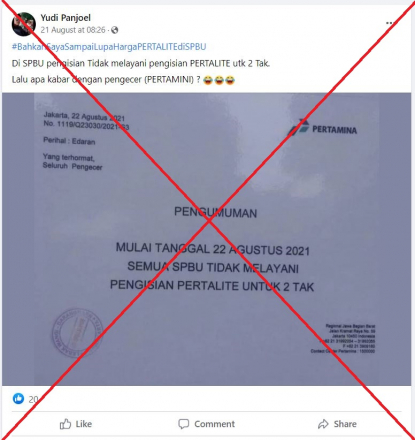 Pertalite is one of eight gasoline products from Pertamina.

The identical image also appeared in other Facebook posts, such as here, here, here and here.

Fajriyah Usman, acting senior vice president of corporate communications and investor relations at Pertamina, told AFP on August 27, 2021, that the photo was "a hoax".

"It is not an official announcement from Pertamina, therefore it is a hoax," she said.

Eko Kristiawan, the company's unit manager for communication, relations & CSR in western Java region, confirmed to AFP on September 1, 2021, that the letter "was not issued by Pertamina".

"There is never such ban from Pertamina," he said.