Photos showing sculptures of life-size humans and animals are being shared in social media posts with a claim that all of the residents of a village in Nigeria were transformed into statues. However, the claim is false: the images were taken at the Saradiel Village in Mawanella — a Sri Lankan tourist destination famous for its sculptures depicting a local tale.

At least 20 photos showing stone humans, animals and objects in a rural setting were published in several Facebook posts, including this one published on August 22, 2021. It has been shared more than 5,000 times.

“This is town that all entire  peoples in town become statue..... (sic),” the Facebook post’s reads. 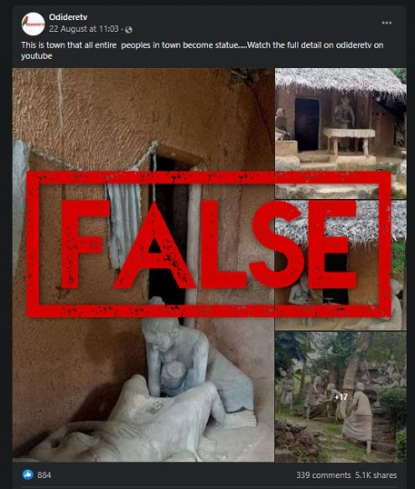 Although the Facebook user did not mention where this alleged incident occurred, he directed people to his YouTube page, where he further explains in Yoruba language that the photos show villagers who turned to stone after a volcano erupted on them and solidified.

Meanwhile, the same set of images also appeared in similar social media posts claiming they were taken in Esie, a town in Nigeria’s central Kwara state.

“This is the town where all the entire people in the town became statues,” the post reads. “The town is Esie, Kwara state. You can visit their museum!”

Esie is home to a museum called House of Images that is well-known for its large collections of ancient soapstone figures of men, women, children and animals.

In August 2011, Nigerian broadcaster Channels Television ran a video report on the artifacts in which the museum's education officer explained that the carved sculptures were once believed to be humans turned to stone for being disobedient.

Screenshot of a virtual tour of Esie Museum, taken on August 27, 2021 ( Nigeria's National Council for Arts and Culture / )

While these figures feature human-like facial features, they are not life-sized and look nothing like those in the Facebook photos.

Also, the sculptures in these viral Facebook posts are not found in Nigeria.

The village, which features numerous carved figures of humans, animals and objects, was created by Dr. Ariyasena U Gamage to recreate the story of popular rebel Saradiel, who stole from the rich and distributed the proceeds to the poor.  The village is now a popular tourist attraction.

Some of the sculpture figures captured in the Facebook photos can be seen in the YouTube video, which also features interviews with tour guides working in Saradiel Village. 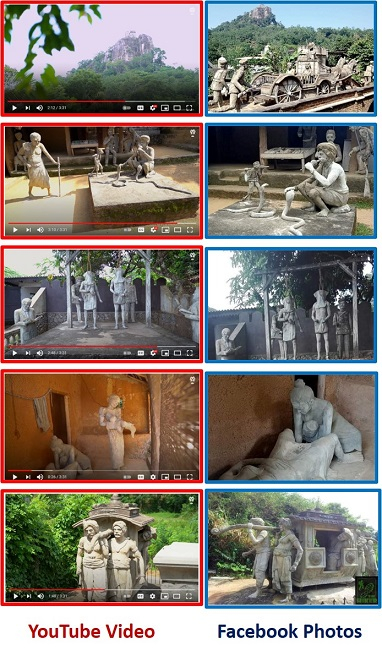 Several other Sri Lankan media reports have featured the village, including here and here.