An image has been shared in multiple posts on Facebook and Twitter alongside a claim that Afghan resistance fighters are preparing an attack against the Taliban in the Panjshir Valley region. The image, however, has been shared in a false context: it shows a village in Pakistan.

The post shared a satellite image of a valley. The Pashto-language word "Panjshir" has been superimposed.

The Panjshir Valley -- located in Afghanistan's Panjshir Province -- is home to an anti-Taliban resistance movement.

As of August 30, 2021, it was one of few regions in Afghanistan not controlled by the Taliban after they seized power.

The Taliban claimed it would send "hundreds" of fighters to the valley on August 22, AFP reported here.

A reverse image search on Google found the same image was published on Facebook here on August 2, 2018 by the Pamir Times, a Pakistan online news portal.

Contacted by AFP, the photographer Hunzukutz Kahn said he took the photo.

He posted the image on his Facebook page here on August 1, 2018.

"I took this aerial image and this is Ganish Bridge Hunza," he said.

Satellite imagery of Ganish Khun village on Google Maps also corresponds to the image in the misleading posts.

Below is a screenshot comparison of the image in the posts (L) and satellite image of Ganish Khun village (R), with similar features highlighted by AFP: 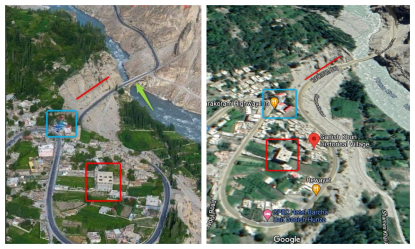 Screenshot comparing image in the posts (L) with a satellite image of Pakistan's Ganish Khun village (R). Similar features have been highlighted by AFP. Taken on August 27, 2021. ( AFP / )

The green arrow highlights the Ganish Bridge, which can be seen tagged at the same location on Google Maps here.