Skip to main content
Families begin to board a US Air Force Boeing C-17 Globemaster III during an evacuation at Hamid Karzai International Airport in Kabul, Afghanistan on August 23, 2021 ( US Marine Corps / Handout / AFP / Samuel Ruiz)

Facebook posts claim video footage of a US Air Force jet taking off with Afghans clinging to the sides as they tried to escape Taliban rule was staged and that the plane depicted is fake. But Air Force spokeswomen said the aircraft is real, and that an investigation of the deadly incident is underway.

"Plane in Afghanistan is fake! Fake News! Are we being fed propaganda?" says text accompanying the video in an August 21, 2021 Facebook post. 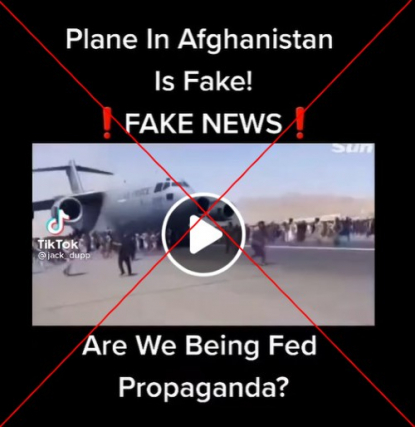 Raw footage of the scene broadcast by US network CBS shows people running alongside the military transport aircraft, with some climbing onto the sides. As the plane flies away, people fall to the ground. 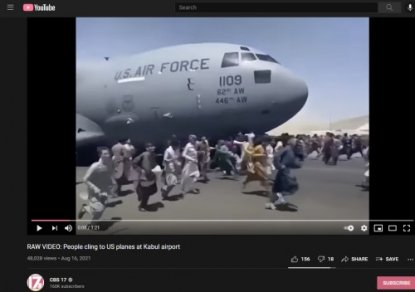 "Before the aircrew could offload the cargo, the aircraft was surrounded by hundreds of Afghan civilians who had breached the airport perimeter. Faced with a rapidly deteriorating security situation around the aircraft, the C-17 crew decided to depart the airfield as quickly as possible," Stefanek said.

The plane is currently impounded as the Department of the Air Force Office of Special Investigations reviews information about the takeoff which resulted in the loss of civilian lives, including video from social media posts, she said.

"In addition to videos seen online and in press reports, human remains were discovered in the wheel well of the C-17 after it landed at Al Udeid Air Base" in Qatar.

Air Force spokeswoman Deana Heitzman also made clear that the plane is in fact real.

"I can confirm that the C-17 Globemaster III is real and assigned the 62nd Airlift Wing at Joint Base Lewis-McChord in Washington," she said.

The posts cite alleged clues to support the claim, such as one Instagram post that said the number "1109" visible on the plane alludes to the attacks in the United States on September 11, 2001, calling it an "inflatable decoy plane." 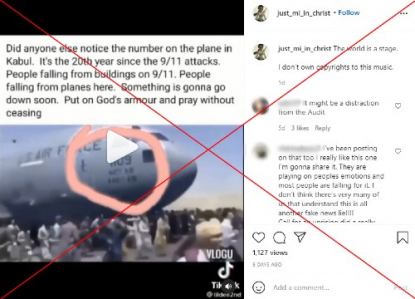 But Heitzman explained that "the numbers on the side of the aircraft, 1109, are the last four digits of the serial number."

Photos of the jet, taken before the incident and available in aviation database Jetphotos.com, list the plane as registered under "02-1109."

The Pentagon warned on August 27 that the high-risk Kabul airlift operation to evacuate Americans and Afghan allies still faces "specific, credible threats," a day after a suicide bombing at the Kabul airport left dozens dead.

More than 110,000 people have been evacuated via the airlift since August 14.