Following the Taliban's takeover of Afghanistan, a video has circulated on Facebook and Twitter purporting to show a helicopter flying over the nation's capital, Kabul, while playing a song that celebrates Afghan national pride. The posts circulated online two days before Afghanistan's Independence Day. The claim in the posts is false: other versions of the video have circulated online since at least June 2021 without the song.

The video purports to show a helicopter flying over Afghanistan's capital Kabul while the song, "Watan Eshq Tu Eftekharam" -- a song celebrating Afghan national pride -- plays in the background.

Another version of the song can be found here, posted by Afghan media outlet Tolo News.

The post's Pashto-language caption translates to English as: "Mandagar's song 'Watan Eshq To Iftakharam' is sung on the sky above Kabul. This song is composed by Ustad Abdul Wahab Madadi with his own voice and this poem is from the anthems of Dr. Mohammad Nasir Tahouri".

A screenshot of the post claiming that an Afghan national pride song was played over Kabul's skies, taken on August 25, 2021 ( AFP / )

The post circulated online two days before Afghanistan celebrated its independence from British rule on August 19.

The video was posted with a similar claim on Twitter here; and on Facebook here, here and here.

A reverse image search of the video's keyframes found earlier versions of the footage posted online, including here on YouTube on June 15, 2021.

The earlier clips do not contain the song played in the misleading posts.

Below is a screenshot comparing several keyframes from the misleading posts (L) and the video posted on June 15, 2021 (R). 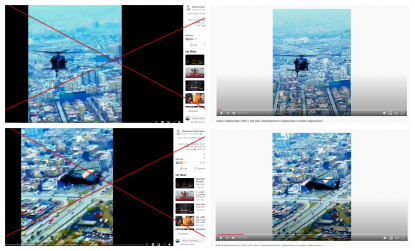 Screenshot comparing footage from the misleading posts (L) and the footage from June (R), taken on August 25, 2021 ( AFP / )

Using satellite imagery of Kabul, AFP was able to determine the video does indeed show an aerial view of the city.

Below is a screenshot comparing a scene from the video posted in June (L) and a satellite view of the same area (R) with similar features highlighted by AFP.

Screenshot taken on August 25, 2021, comparing a shot from the video posted in June (L) with a satellite image showing the same area (R), with similar features highlighted by AFP ( AFP / )

The coordinates of the satellite image can be accessed here.