Skip to main content
A police officer patrols a quiet street in Sydney during a lockdown to contain a fast-spreading coronavirus outbreak. ( AFP / DAVID GRAY)

Several social media posts have shared an article that claims a prisoner in an Australian jail requested to extend his sentence in response to harsh lockdowns in the country's largest city, Sydney. The article, however, originated from a satirical website.

"Prisoners asking for an extension in jail," reads the caption on an Instagram post published on August 20, 2021.

It reads in part: "THROW AWAY THE KEY: A prisoner at Sydney’s Long Bay correctional centre has formally requested an extension to his jail sentence, as he seeks to avoid the city’s harsh lockdown measures." 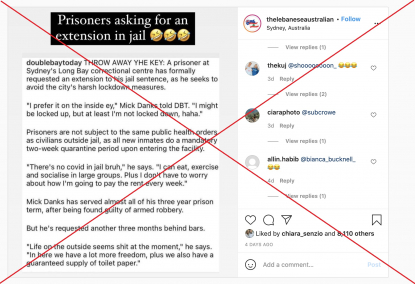 The post circulated online after Sydney imposed an extended lockdown and partial curfew as the city struggled to contain the spread of Covid-19.

Comments on the post indicated some social media users were misled by it.

"Pretty sad when you have more freedom inside jail then [sic] out," reads one comment.

Another comment reads: "So sad really what's happened to our beautiful Australia".

Other instances of the claim appear on Facebook here and here.

A Google search of the text in the misleading post found this article published August 12, 2021 on Double Bay Today.

At the bottom of the page, Double Bay Today describes itself as "an Australian satirical news website, established in January 2018."

Below is a screenshot of the declaration:

A screenshot of the Double Bay Today website as of August 24, 2021.

As of August 25, 2021, AFP found no credible reports that a prisoner in Sydney requested to extend his jail time in response to the city's lockdown.