A video of armed men prostrating in a street has been viewed thousands of times in Facebook posts that claim it shows Taliban insurgents in Kabul in 2021. The claim is false: the footage actually shows Islamist forces celebrating after they seized the Syrian city of Idlib in March 2015.

"I did not see the conquest of Mecca, but saw the conquest of Kabul. Allahu akbar. The Taliban have already taken over various parts of Afghanistan," reads a Bengali-language Facebook post on August 16.

The footage -- which has been viewed more than 5,000 times -- shows crowds of armed men prostrating in a street. 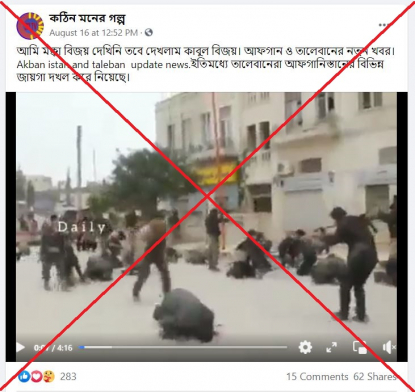 The video was shared in similar Facebook posts here, here and here after the Taliban seized control of Kabul, leading to a scramble to evacuate thousands of people from the Afghan capital.

At the start of the video, a man off-camera is heard proclaiming in Arabic: "God is the greatest. The fighters are prostrating to thank God for the liberation of Idlib city."

Reverse image searches traced the clip to a YouTube video uploaded on March 28, 2015.

The caption claims the footage shows the liberation of Hanano Square in the Syrian city of Idlib. 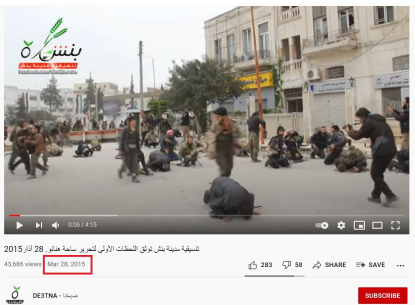 Screenshot of the footage posted in a YouTube video in 2015

Keyword searches found several extracts from the video published on March 29, 2015 in an Al Jazeera report.

"Syrian rebels, including al-Qaeda’s affiliate in Syria, have captured the northwestern city of Idlib for the first time from forces loyal to President Bashar al-Assad, activists and the rebels have said," the report reads.

"Celebrating in front of the governor's building, fighters filmed themselves in victory. The videos have been quick to make it on to the internet".

Below are screenshot comparisons of the video shared in the misleading Facebook posts (left) and in Al Jazeera's report (right):

Various visual clues in the footage suggest it was filmed in Syria, not Afghanistan.

The higher-quality footage in Al Jazeera's report shows that the flag seen tumbling to the ground is the Syrian flag.

It has horizontal red, white and black stripes with two green stars in the centre.

The flag can be seen at various other points in the footage, including here and here.

The logo for airline SyrianAir is also visible here and here.

AFP has previously debunked various false claims about the conflict in Afghanistan.