Multiple Facebook posts claim a photo of men praying in a field shows Taliban fighters in Afghanistan offering thanks after the fall of Kabul. The claim is false: the photo is actually a 2012 Associated Press image which shows Eid prayers in Afghanistan.

It has been shared widely on Facebook, including here on August 16, 2021. 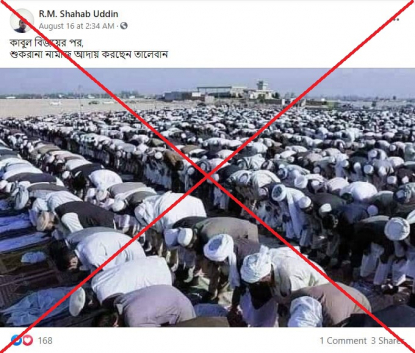 The post's Bangla-language caption translates to English as: ‘’After the conquest of Kabul, The Taliban are performing Shukrana prayers [prayers of gratitude].’’

The photo has also been posted here, here and here on Facebook alongside a similar claim.

A Google reverse image search found the photo was actually taken by US news agency the Associated Press in 2012.

It can be seen in the AP's online archive here.

The photo was taken by AP photographer Rahmat Gul in Jalalabad, Afghanistan, on October 26, 2012.

The photo's caption reads: "Afghans offer Eid al-Adha prayers outside a mosque in the outskirt of Jalalabad east of Kabul, Afghanistan, Friday, Oct. 26, 2012".

The photo was also featured in this report by American magazine The Atlantic published on November 2, 2012.