This photo shows artists painting a mural in Afghanistan in 2019

A photo of men painting a mural has been shared hundreds of times in social media posts that claim it shows youths celebrating the Taliban takeover of Afghanistan. The claim is false; the image shows artists painting a mural in 2019 to commemorate civilians who lost their lives during the Afghan war.

"How the Afghan Taliban youth painted walls in a gesture to celebrate their victory," reads a Sinhala-language Facebook post from August 17 shared more than 1,000 times. 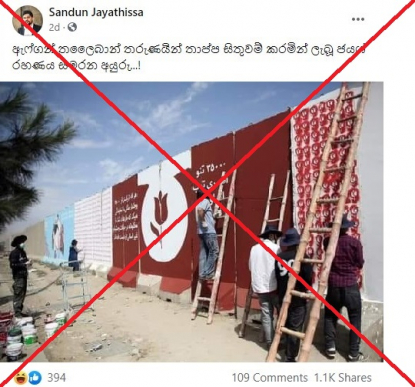 The image circulated online after the Taliban took control of Afghanistan, nearly two decades after they were ousted by a US-led invasion in the wake of the September 11, 2001 attacks.

The image was shared on Facebook here and here alongside a similar claim.

A reverse image search found the photo was published in this article from Military Times published on September 1, 2019. 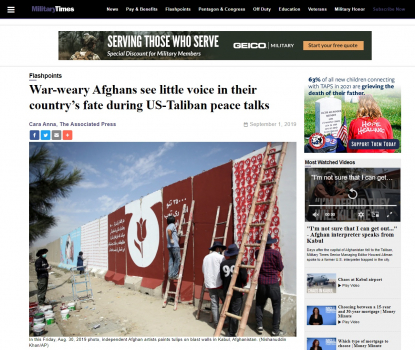 Screenshot of the article captured on August 19, 2021

The photo's caption reads: "In this Friday, Aug. 30, 2019 photo, independent Afghan artists paints tulips on blast walls in Kabul, Afghanistan." It is credited to Nishanuddin Khan from AP news agency.

The picture shows a youth group painting a mural in memory of civilians who lost their lives during the Afghan conflict, the article reports.

The image is available hhere is AP's archives, where it was published on August 30, 2019.

It is captioned: "In this Friday, Aug. 30, 2019 photo, Independent Afghan artists paints tulips on blast walls in Kabul, Afghanistan, For almost a year, Afghanistan's more than 30 million people have been in the awkward position of waiting as a United States envoy and the Taliban negotiate their country's fate behind closed doors." 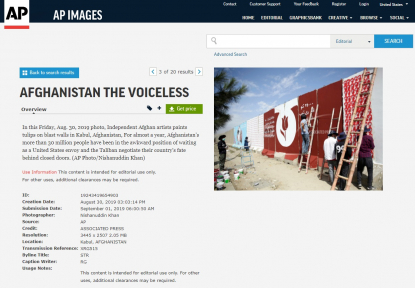 Screenshot of the AP article captured on August 19, 2021