A video of men dancing with weapons has been viewed millions of times in social media posts that claim it shows Taliban fighters celebrating after capturing the Afghan capital in August 2021. The claim is false: the video has circulated online since at least March 2021 in posts about a wedding in Pakistan.

"Taliban militants' DJ dance while Afghan people were rushing to save their lives after the capture of Kabul," reads a Bengali-language Facebook post from August 17.

The video shows a group of men dancing while wielding weapons. 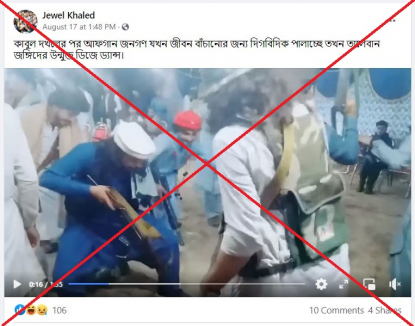 The video was shared around the world alongside a similar claim, including in the Netherlands, Nigeria, the Philippines and the United States.

Some of the videos purported to show the men dancing to "In My Feelings" by Canadian rapper Drake. One such video was viewed more than 3.5 million times on Facebook in Kenya.

The video, however, has been shared in a false context.

A reverse image search of a keyframe extracted from the footage using the InVID-WeVerify tool found the same video posted online months before the Taliban took control of Afghanistan.

The oldest video AFP found was posted to YouTube on March 25, 2021 in a video called "DJ Bannu Dance".

Bannu is a district in Pakistan's Khyber Pakhtunkhwa province.

Below is a comparison of the video in misleading social media posts (L) and the YouTube video (R):

Comparison of video in misleading social media posts (left) and in the YouTube video from March (right).

Several other versions of the video were posted in March alongside the claim it was filmed at a wedding party.