Tweets published in August 2021 share a June 2020 news story along with a claim that Indonesia's upcoming elections would be postponed until 2027. But the claim is false. The country's General Elections Commission said on August 17, 2021, that the next poll will be held in 2024, five years after the most recent general elections. An expert told AFP that the news had been taken out of context.

This tweet, which was uploaded on August 16, 2021, features a story published by local media outlet CNN Indonesia on June 23, 2020, headlined: "KPU Says 2024 Simultaneous Elections Might Be Postponed Until 2027".

The Twitter post, which has been retweeted more than 1,300 times, says: "Plan A
Three periods [for] Jokowi through MPR
= FAILED

"Plan B
The general elections, presidential election shifted by KPU
= ON PROCESS 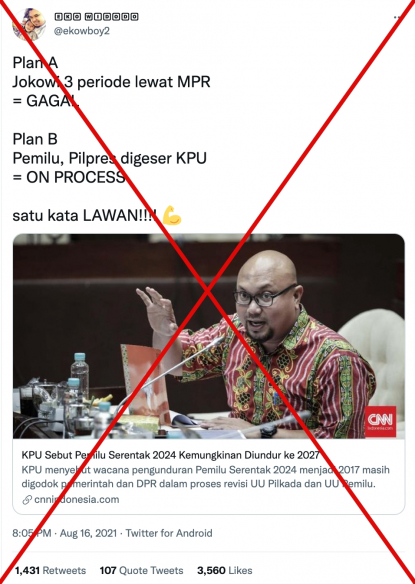 Jokowi is the popular nickname of the country's current president, Joko Widodo.

Jokowi is currently serving his second term in office after winning the presidential election in 2019, AFP reported here.

Other tweets published in August 2021, carrying the same news story, have been shared more than a thousand times after appearing here, here, here and here.

A similar claim that suggested the poll will be delayed until 2027 has also appeared on YouTube in this August 2021 video and in this June 2020 clip.

On August 17, 2021, the KPU issued a statement saying that the next general and regional elections will be held in 2024, five years after Indonesia's most recent general elections in 2019.

The first paragraph of the CNN Indonesia news story says: "The General Elections Commission (KPU) said plans are being finalised by the government and DPR to postpone the 2024 simultaneous regional elections until 2027."

DPR refers to the country's parliament, the People's Representative Council.

The article continues: "KPU commissioner Ilham Saputra said that the plans are currently being finalised by the government and DPR in the process of revising Law No. 10 Year 2016 on regional elections and Law No. 7 Year 2017 on general elections."

The seventh paragraph of the article reads: "In recent years, Indonesia has had big plans to synchronise all general elections."

Titi Anggraini, advisory board member of the Association for Election and Democracy (Perludem), said that the "news of the election postponement seemed to be twisted from the news reports that were taken in parts and did not fully describe the information or views stated by KPU commissioner Ilham Saputra.

"So the KPU commissioner spoke in the context of the discourse of ideas contained in the Election Bill, which states there is a possibility that the simultaneous regional elections that are to elect DPRD members and regional leaders will change and shift from 2024 to 2027," she told AFP on August 18, 2021, referring to Indonesia's regional parliaments.

"But Ilham Saputra in that context did not say that the general elections, presidential, parliamentary and DPD elections will shift to 2027," she said, referring to the country's Regional Representative Councils.

The deliberation of revising Indonesia's Election Bill has been withdrawn from the national legislation programme as stated by the country's parliament here and as reported by Indonesian news outlets here, here and here.

"As long as the constitution is not amended, the term of office of the president cannot be reduced or increased," said Titi of Perludem.