A photo appearing to show a Taliban official holding up a Mao Zedong book at a press conference has been shared hundreds of times on social media platforms, alongside a claim it shows the Taliban giving credit to the Chinese communist's book for their military victory. The claim is satirical: the photo has been doctored to include the book.

The post's simplified-Chinese caption reads: "The reporter asked the Taliban's person in charge: What made you able to occupy the whole country of Afghanistan so quickly?"

The photo appears to show Taliban negotiator Shahabuddin Delawar holding up a Chinese-language volume of "Selected Works of Mao Zedong" during a press conference. 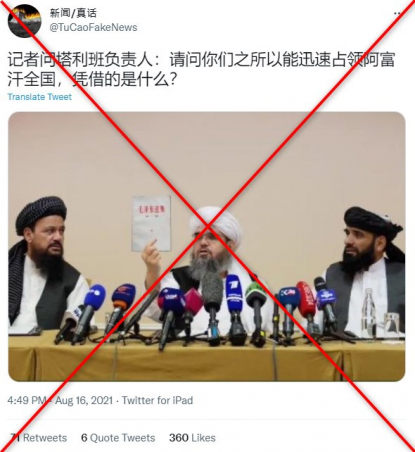 The book is a collection of the written works of Communist China's founding leader ranging from the years 1926–1957.

The press conference, at which the Taliban claimed that 85% of Afghanistan's territory was under their control, took place in Moscow in July, as reported by AFP here.

A selection of comments under the misleading tweet suggested that social media users were misled by the photo.

Others wrote: "It's the Afghan people who chose us" and "[They] even understand Chinese, brilliant". 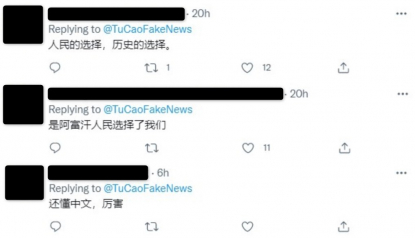 A screenshot, taken on August 17, 2021, of comments under the misleading post

The same photo was also shared on Twitter here and here and on Facebook here alongside a similar claim.

However, the claim is satirical: the book was digitally inserted into the photo.

Below is a screenshot comparison of the doctored photo (L) and the photo published by Reuters (R):