The photo predates the 2021 Taliban onslaught

A photo has been shared in multiple social media posts and articles which claim it shows well-equipped Taliban fighters in 2021 during the group's advance across Afghanistan. The claim is false: the photo has circulated online since at least 2016 in reports about the Special Operations Forces of the Afghan National Police.

The image shows some well-equipped soldiers.

The simplified Chinese characters overlaid underneath the photo reads: "The Taliban became a regular army overnight, equipped with tactical helmets and night vision devices, and did not lose to the government forces."

The Facebook post's caption is similar to the words overlaid on the image. 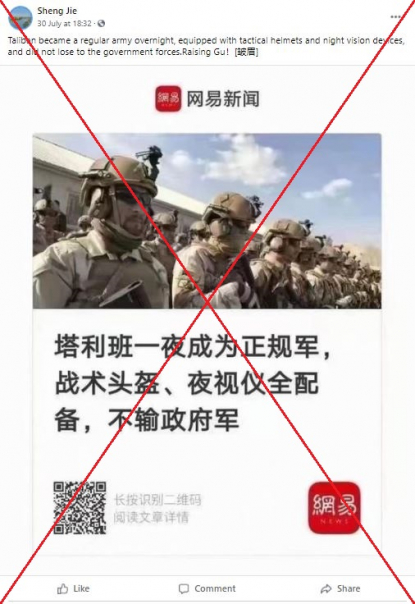 Afghan President Ashraf Ghani said on August 15, 2021 after fleeing the country that the Taliban had won, as the militants entered Kabul nearly 20 years after they were ousted from power by a US-led invasion, AFP reported here.

The Taliban entered Kabul and took over the presidential palace, sealing a nationwide military victory in just 10 days.

The same photo of troops has also been shared with similar descriptions from July 2021 here on Facebook, here on Twitter, here on Weibo, and in online articles here and here.

The photo has circulated online since at least 2016 in reports about the Special Operations Forces of the Afghan National Police, which predates the 2021 Taliban onslaught.

Below is a screenshot comparison of the photo shared in the misleading posts (L) and the photo published by SOF News in 2016 (R):

The description of the photo reads: "Members of the Afghan Ministry of Interior (MoI) General Directorate of Police Special Units (GDPSU) in formation. (DoD photo 2016)."

The report reads in part: "Over 400 leaders of the Taliban group were killed in the past 9 during the operations conducted by the Afghan Special Forces, the Ministry of Interior (MoI) officials said Wednesday.