A video of a young girl playing table tennis has been viewed thousands of times in social media posts that claim it shows Chinese Olympic champion Chen Meng when she was young. The claim is false; the video shows a 5-year-old girl from eastern China named Li Yi-yi, not Chen, who won a gold medal in the Tokyo Games.

"This little girl looks familiar, right? She is the Olympic champion, Chen Meng. She was born in 1994 and started to learn to play table tennis in 1999. Think again after watching this: is it easy to be the world champion?" reads a Chinese-language Facebook post from August 2.

The video -- viewed more than 13,000 times -- shows a young girl playing table tennis. She appears to become tearful when corrected by her teacher, before returning to the table to give an impressive performance.

Chen Meng is a Chinese table tennis champion who won gold medals in both the women's singles and women's team competitions at the 2020 Tokyo Olympics.

The video was shared alongside a similar claim here and here on Facebook; here on YouTube; and here on Weibo.

However, the claim is false. The girl in the video is not Chen Meng. 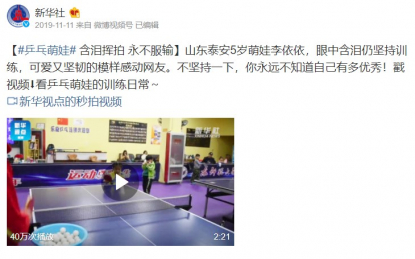 "Be persistent, or you will never know how good you are! Watch this video showing the daily training of this cute little table tennis girl".

Below is a screenshot comparison of the video in the misleading post (L) and the video published by Xinhua News Agency (R):

A screenshot comparison of the video in the misleading post and the video published by Xinhua News Agency. ( AFP)

Hong Kong news organisation HK01 has also reported on the video here on May 11, 2021.

Chen Meng's childhood photo was shown in the video at the one-minute 18-second timestamp.